Samuel Shimon at University of Texas at Austin 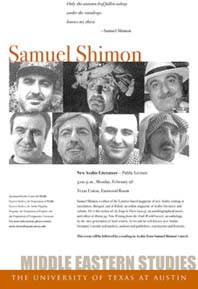 Samuel Shimon is the founder-editor of both Banipal magazine and the Arabic literary and cultural website www.kikah.com. He is the author of An Iraqi in Paris and editor of the anthology of writing by the 39 authors of the Beirut39 Hay festival project, Beirut39:New Writing from the Arab World. His talk will discuss the trends of new Arabic literature, markets, authors and publishers, translations and festivals.