"Destined to become a classic"
say the judges. 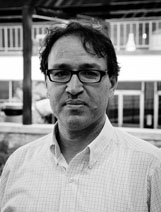 The 2011 Prize for Arabic Literary Translation, the sixth year of the prize, is awarded to Khaled Mattawa for his translation of Adonis: Selected Poems, published by Yale University Press. The judges were unanimous in voting Khaled Mattawa’s translation the winner and agreed easily on the runner-up and the commended translation.

The four judges, who met last December under the chairmanship of prize administrator Paula Johnson of the Society of Authors, are novelist, columnist and critic Joan Smith, writer, translator and Professor of American Literature and Public Understanding of the Humanities at the University of East Anglia Sarah Churchwell, translator and lecturer in Arabic Literature and Media at the University of Exeter Christina Phillips, and author and editor of Banipal magazine Samuel Shimon who is also a trustee of the Banipal Trust for Arab Literature. Their decisions are announced below.

Khaled Mattawa for his translation of Adonis: Selected Poems 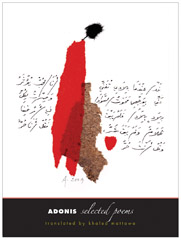 Khaled Mattawa’s translation of this selection of Adonis’s poetry is destined to become a classic. It is a monumental piece of work, a long-overdue compendium of works by one of the most important poets of our time, a contribution to world literature that demonstrates the lyricism and full range of Adonis’s poetry. The translations are supple and fluent, flexible yet accurate, consistently sensitive to the poet’s nuances, and beautifully render into English Adonis’s modernist sensibilities. Anglophone readers will gain a new appreciation of why Adonis has so often been likened to TS Eliot and Ezra Pound, with the freshness of his lines and imagination liberated from the self-conscious archaism of other translations, and allowing his unique reworking of the legends of East and West, the arcs of love and death, to spring forth. This book should ensure that Western readers recognize the significance of Adonis’s contribution to world poetry. 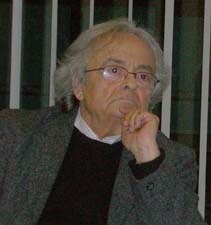 Adonis is internationally known as a poet, theoretician of poetics and thinker, a patriarch of modern Arabic literature whose poetry resonates with universal dimensions. Known for his biting criticism of the dominating influence of Islamic ideology on modern Arabic literature, his influential, daring and experimental works of poetry enjoin the present with the past while giving perspectives into the future. Adonis’s poems in their original Arabic are not easy, in fact they are difficult and complex. They are multi-layered with history, myths and ideas, rooted in metaphors, symbols and surrealist images, and wide-ranging in genre and styles – all woven within a fine and concise language.

It was an immense challenge that faced the talented poet-translator Khaled Mattawa in translating Adonis’s poems to English or, as is often said in the Arab world, to the “language of Shakespeare”, and he has succeeded most eminently. Adonis: Selected Poems is a substantial and comprehensive volume covering over half a century of Adonis’s works from 1957 to 2008. Khaled Mattawa has brought Adonis’s poems to the English language with a musicality and aesthetic sensitivity that echo their innovative, conceptual and stylistic complexities – and in doing so he has created an original, powerful and lyrical poetic work in English. In a word: stunning.

• Director of Yale University Press John Donatich was delighted with the news and commented: “It is very gratifying to see Adonis and his wonderful translator Khaled Mattawa receive this prestigious award. I know from personal experience how many readers have been so moved by these Selected Poems; it is so important that other people discover the work.”

Barbara Romaine for her translation of Spectres by Radwa Ashour

Radwa Ashour’s Spectres is an ambitious and moving blend of autobiography, history, politics and fiction telling the story of Egypt since the 1950s through the experiences of two women who are each other’s ghostly doubles. This experimental novel, which is political in the best sense, needs a confident translator, and has found one in Barbara Romaine. Her impressive translation renders the metaphorical power of Ashour’s story with grace and subtlety, skillfully reflecting the shifts in time and the different voices and registers. Fluent and refreshing, Romaine has done a brilliant job.

Maia Tabet for her translation of White Masks by Elias Khoury

First published in Arabic in 1981, White Masks was one of the first novels that dared to address the civil war in Lebanon, the terrible atrocities, and the war’s reflection in the daily lives of the people. Bringing home the dreadful reality of civil war, it is a fascinating investigation into investigation itself, telling the story of the murder of one man during the Lebanese Civil War, and showing the chaos and incoherence of history as it emerges, and the importance of personal stories to counteract and contain the messiness of history. Elias Khoury’s language is smooth and poetic, and finds its parallel in the masterful translation of Maia Tabet which brings the immediacy of the story to life, without sacrificing the nuances of Khoury’s moral and philosophical questions, transposing the colour and originality of the Arabic into wonderfully lucid prose.

Readings by the prizewinners

and the Sebald Lecture on the Art of Literary Translation

given by Sean O’Brien on

“Making The Crossing: the Poet as Translator”

• Khaled Mattawa was born in Benghazi, Libya in 1964 and emigrated to the USA in his teens. He has translated eight volumes of contemporary Arabic poetry, Adonis: Selected Poems (2010), shortlisted for the 2011 Griffin Poetry Prize; Shepherd of Solitude by Amjad Nasser (2009); These Are Not Oranges, My Love by Iman Mersal (2008); A Red Cherry on A White-Tiled Floor by Maram Al-Massri (2004, 2007); Miracle Maker (2003) and In Every Well A Joseph Is Weeping (1997) by Fadhil al-Azzawi; Without An Alphabet Without A Face by Saadi Youssef (2002), winner of the 2003 PEN Award for Poetry in Translation; Questions and Their Retinue by Hatif Janabi (1996).

In 2010 he was selected as recipient of the 2010 Academy Fellowship by the Academy of American Poets. He teaches creative writing in the English faculty at the University of Michigan, Ann Arbor, and served as President of RAWI, (Radius of Arab American Authors) 2005-2010. He has received a Guggenheim fellowship, an NEA translation grant, the Alfred Hodder Fellowship from Princeton University, the PEN American Center Poetry Translation Prize, and three Pushcart Prizes and is a founding contributing editor of Banipal.

• Adonis was born Ali Ahmad Said in Al-Qassabin, Syria, in 1930, and adopted the name Adonis when he was 17. He co-founded Sh’ir poetry magazine and later formed Muwaqaf, working to liberate Arabic poetry from its old forms and pioneering the prose poem. He is author of over 20 collections of poetry. An internationally renowned poet, essayist, and theoretician of Arabic poetics, he is regarded as “the grand old man of poetry, secularism and free speech in the Arab world" who champions democracy and secular thought in the Middle East, and the separation of state and religion. He is the recipient of many international awards and is an elected member of the Stéphane Mallarmé Academy in France. In May 2011 he became the first Arab laureate of Germany’s premier literary prize, the Goethe Prize.

On 3 February 2012 A Tribute to Adonis will open at the Mosaic Rooms in London with talks and an exhibition of Adonis's collages that runs until 30 March 2012 (for more information go to http://www.mosaicrooms.org/a-tribute-to-adonis/). Both Adonis and Khaled Mattawa will be present.

• Barbara Romaine has been teaching the Arabic language for about twenty years, and since 2008 at the University of Villanova. She has translated the novels Aunt Safiyya and the Monastery by Bahaa Taher (University of California Press, 1996) and Siraaj by Radwa Ashour (University of Texas Press, 2007). Her translation of Spectres was supported by a National Endowment for the Arts fellowship in 2007. She is currently at work on another of Ashour’s novels, Farag (Dar El Shorouk, 2008) which is forthcoming from Bloomsbury Qatar Foundation Publishing.

• Maia Tabet was born and raised in Beirut. She has worked as a journalist, editor and freelance translator. Her first full-length book translation was Little Mountain by Elias Khoury. She has lived and travelled throughout the Middle East and South Asia, and is currently based in Baltimore, USA. White Masks is her most recent book translation. Her translation of the winning novel of the 2010 International Prize for Arabic Fiction, Saudi author Abdo Khal’s Tarmi bi Sharar (Spewing Sparks as Big as Castles) is forthcoming from Bloomsbury Qatar Foundation Publishing.

The prize is administered by the Society of Authors in the UK, as are other prizes for literary translation into English from European languages. The Award Ceremony is hosted by the British Centre for Literary Translation, the Arts Council, and the Society of Authors. The Saif Ghobash-Banipal entries can have been published anywhere in the world but must be available for purchase in the United Kingdom, either via a distributor or on-line.

The prize, the first worldwide for a published work of English literary translation from Arabic, was established in 2005 by Banipal, the magazine of modern Arab literature in English translation, and the Banipal Trust for Arab Literature. It is wholly sponsored by Omar Saif Ghobash and his family in memory of his father, the late Saif Ghobash, a man passionate about Arabic literature and other literatures of the world.

• Both Adonis and Khaled Mattawa will be present at the Prize Award Ceremony on 6 February 2012.

• If you require digital images of Khaled Mattawa, Adonis, or the front cover of Adonis: Selected Poems and the logo of the Prize, please email margaret@banipal.co.uk

• For further history of the prize, more information about the judges, the rules, and details of the winning books, please go to http://www.banipaltrust.org.uk/prize/

• To arrange an interview with Khaled Mattawa, or for any other information, please contact the Banipal Trust for Arab Literature at:

Or email the Trust's administrator Margaret Obank on info@banipaltrust.org.uk or margaret@banipal.co.uk