The Beautiful Creatures of Fadhil Al-Azzawi 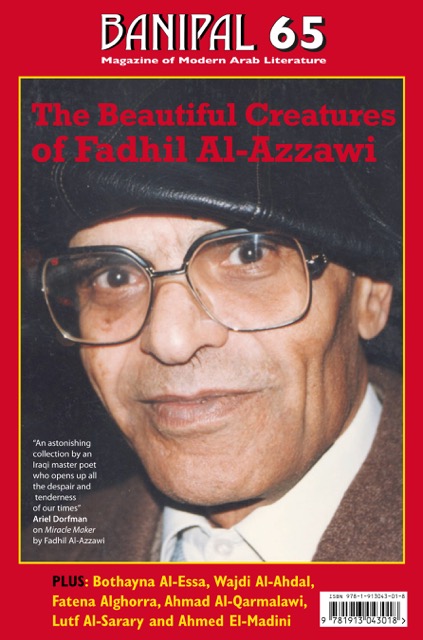 The main feature of the Summer issue is Iraqi poet and novelist Fadhil al-Azzawi and his “Beautiful Creatures”. He has been a contributing editor of Banipal since it started and during these years we have been thrilled to see some of his works translated into English, including in Banipal issues, as well as, below, the excellent translations of poetry and fiction. His works are so innovative and original, so full of compassion and heartache, of conceptual leaps, rich references and linguistic surprises that we did not hesitate to include on the front cover a note by Arial Dorfman striking the very same note – the first time we have ever done that for any author.

When we look at the volumes of remarkable poetry and fiction Fadhil has written over more than half a century, without receiving any prize or award, this make us wonder what this often-used phrase “award-winning writer” means other than to make us smile.

The feature includes articles by invited poets, translators and critics on Fadhil and his works. Farouk Yousif writes of Fadhil al-Azzawi’s “commitment to the role of the free and independent intellectual” and how he forged “an aesthetic and intellectual labyrinth carefully fortified with his own personal riddles . . . his weapons of choice against a dark and enigmatic world”. Reading his poems for the first time Khaled Mattawa was astounded by “their pathos, irony, precision, and humor”, unlike anything he’d ever read before in Arabic. Stefan Weidner writes that the 25 years it has taken to get a German translation of The Last of the Angels, is not in vain as now “we know what the author is talking about, and we know that it concerns us”. William M Hutchins, who has translated a number of Fadhil's novels, writes of his “fortuitous and momentous chance encounter” with Fadhil in Cairo; Omani poet Saif al-Rahbi relates how Fadhil “has expanded the space of expression” in both poetry and fiction, while Iraqi critic Fadhil Thamir calls for Fadhil to be “reread as a revolutionary poet in terms of both his language and message”.

After the first page poem by Samer Abu Hawwash, the issue opens with a chapter, full of suspense, entitled “Lost in Mecca” from talented Kuwaiti author Bothayna Al-Essa’s novel Maps of the Labyrinth. We are pleased to include two authors from war-stricken Yemen – our friend Wajdi al-Ahdal, and a new voice in English, Lutf al-Sarary. Wajdi al-Ahdal’s translator William M Hutchins describes the author’s latest novel Land of Happy Conspiracies as “about as noir a novel as one could imagine” . . . in the chapter excerpted a young girl has been raped, a powerful tribal Shaykh arrested and the journalist narrator assigned to cover the case. In this issue, Wajdi al-Ahdal also writes on his Literary Influences. There are three up-to-the-minute short stories inspired by the present war from the collection Please Do Not Bomb by fellow countryman Lutf al-Sarary. One of Morocco’s major literary figures, Ahmed El-Madini, brings us two interestingly structured and slightly surreal short stories. There are three poems from the latest collection of Palestinian poet Fatena Alghorra. And from Egypt, Ahmad al-Qarmalawi, with a chapter from his novel Summer Rains where music – traditional, Sufi devotional and present modern electronic – is the thread for the soul connecting past and present, heritage and modernity, and which won the 2018 Sheikh Zayed Book Award in the Young Author category.

This issue, with great sadness, pays tribute to our long-standing editor and brilliant scholar Issa J Boullata, who was always ready to translate, make suggestions and offer advice. He sadly passed away on 1 May this year, aged 90. Fellow editor and colleague Bassam Frangieh writes of the “major loss for Arabic thought and literature” and how “a keystone of literary and cultural scholarship has departed”.

We were very pleased and proud when Omani author Jokha Alharthi’s novel Celestial Bodies was longlisted for the 2019 Man Booker International Prize, then shortlisted, and finally it won the Award, jointly shared between the author and translator Marilyn Booth, the first winner translated from Arabic. We were proud because we first published her work in English translation in 2009 (Banipal 35) and later, proud because when she sent us the original Arabic manuscript of the book that same year, asking us to find an publisher, we liked the novel, and recommended it to Rana Idriss, publisher of Dar al-Adab in Beirut. Sayyidat al-Qamar (Ladies of the Moon) came out in 2010, and we excerpted a chapter in Banipal 40 (2011). It’s such a wonderful journey for this book and a great achievement for Arabic Literature. Congratulations Jokha and Marilyn! However, when we started Banipal in 1998 it was impossible to imagine something like this happening. Now, 21 years later, there are moves in many quarters to support the translation of Arabic literature into other languages, to recognise its talent and world-wide interest. What a change!

More information about the issue and full contents