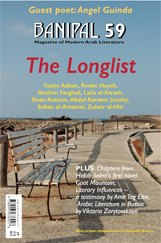 Summer Banipal is a chance to present a host of great reading opportunities, and our focus theme The Longlist, featuring novels from the longlists of the International Prize for Arabic Fiction over the last two years, offers precisely that. In a number of previous issues we have published, in collaboration with the IPAF, dedicated features on the annual shortlists. One day we thought, let’s give longlisted novels a chance to be showcased. Some authors have been longlisted more than once, while others have had works shortlisted, and some have translations, such as the 2013 longlisted novel The President’s Gardens by Muhsin al-Ramli, which was published in English by Maclehose Press in April this year and has been wonderfully received and reviewed. We started off with a fairly long list, but have had to reduce it to eight novels for reasons of space.

We open the issue with a short tribute to our dear friend Denys Johnson-Davies, who is sorely missed by the growing numbers of people now engaged in translating contemporary Arabic literature into English.

The first fiction pages are chapters from the wonderfully descriptive and atmospheric Goat Mountain, the debut novel 30 years ago of Tunisian author Habib Selmi, which Banipal Books will publish in 2018. It is a dark study of relationships and change when the newly appointed schoolteacher arrives at the isolated village of Goat Mountain after a long mule ride. Selmi has eight novels, with The Scents of Marie Claire (English 2010) shortlisted for IPAF in 2009, and The Women of Al-Basatin in 2012. Five of his novels are available in French translation, including Goat Mountain, and two in German.

The Moroccans, by Abdelkarim Jouaiti, longlisted in 2017, is a family saga set in the central

Moroccan town of Beni Mellal, in which the narrator, a schoolboy with deteriorating eyesight when we first meet him, is being looked after by his brother, a badly scarred and wounded ex-soldier. The novel unfolds the inseparable connections between local history, traditional customs, superstitions and modern technology in the boy fighting against going blind and in building workers discovering to their horror hundreds of human skulls as they dig the foundations of a new building.