The Sheikh Zayed Book Award announced the names of the winners of its tenth cycle (2015-2016) in Abu Dhabi, 6 April 2016. The awards and winning titles are as follows: 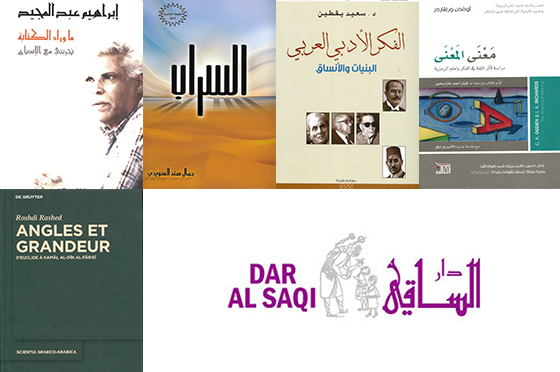 • Contribution to the Development of Nations Award goes to Al-Sarab (The Mirage) by Jamal Sanad Al-Suwaidi from UAE, published by The Emirates Centre for Strategic Studies and Research, 2015. The study focuses on the emergence of politicized religious groups and conducts a multilevel analysis of their religious thought and political ideologies The study also seeks to provide an understanding of the obstacles hindering development, modernization, and progress in the Arab World.

• The Literature Award went to Ma Wara’a al-Kitaba (Beyond Writing) by Egyptian novelist Ibrahim Abdelmeguid, published in 2014 by Al-Dar Al-Masriyah Al-Lubnaniyah, Cairo. The book narrates the author’s experiences on which his novels were based and provides a creative view of the political, social and cultural contexts within which the books were written. For more information about the author, click here

• The Literary and Art Criticism Award goes to Al-Fikr al-Adabi al-‘Arabi (Arabic Literary Thought) by the Moroccan Said Yaktine, published in 2014 by Difaf Publishing, Beirut. The study combines between theory and practice in contemporary criticism in Arabic and is both comprehensive in coverage and innovative in approach.

• The Translation Award goes to the translation by the Iraqi Keyan Yahya of The Meaning of Meaning by Ogden and Richards. The translation was published in 2015 by Dar al-Kitab al-Jadeed, Beirut. This is the first translation of the book in Arabic after more than ninety years of its publication. The study is a landmark in the philosophy of language.

• The Arab Culture in Other Languages Award went to Angles et Grandeur by Egyptian author Roshdi Rashed, published in 2015 by the Walter De Gruyter, Berlin. The study discusses the concept of angle and its relation to Archimedean and non-Archimedean theories of measurement, tracing the history of discussions from Euclid to Kamal al-Din al-Farisi. The volume presents first editions of over twenty texts, either in Arabic or Greek by the greatest mathematicians and philosophers of the time. The texts are translated into French and supplemented with extensive commentary.

• The Publishing and Technology Award went to Dar Al-Saqi. This publishing house has adopted, ever since its establishment in London in 1979, a broad-minded cultural project and published a wide spectrum of serious books in thought, science, and art. Several of its publications won awards in various categories covered by the Sheikh Zayed Book Award.

• Meanwhile, titles in both Children’s Literature and Young Author categories did not meet the Award’s standards. Consequently, the Board of Trustees opted to withhold the awards allocated to them.

• The Cultural Personality of the Year will be announced shortly.

The Award ceremony will take place on May 1st, 2016 during the Abu Dhabi International Book Fair. The winner of Cultural Personality of the Year will receive the award of AED 1,000,000, a gold medal bearing the Sheikh Zayed Book Award logo, and a certificate of merit. Each of the winners of the Award’s other eight categories will receive awards of AED 750,000, a gold medal and a certificate of merit.

The total number of nominations for the current cycle amounted to 1169 in the announced categories, 120 of which made it to the long list. The nominations came from 33 countries including Algeria, Morocco, Jordan, Egypt, Lebanon, Qatar, Kuwait, UK, France and Holland.