· His novel, A Small Death, sees the historical and spiritual adventures of Ibn ‘Arabi brought vividly to life in fiction for the first time 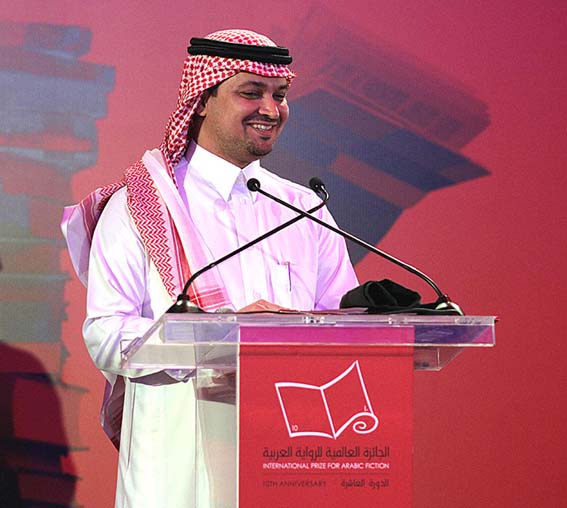 A Small Death by Mohammed Hasan Alwan was  announced on Tuesday 25 April 2017 as the winner of the 10th International Prize for Arabic Fiction (IPAF).

The novel, published by Dar Al Saqi, was named as this year’s chosen title by the Chair of Judges, Palestinian novelist Sahar Khalifeh, at a ceremony in Abu Dhabi. In addition to winning $50,000, funding will be provided for the English translation of A Small Death, and Alwan can expect an increase in book sales and international recognition.

On behalf of the 2017 judging panel, Sahar Khalifeh comments:

“A Small Death explores the life and thought of Ibn 'Arabi. With striking artistry and in captivating language it sheds light on Ibn 'Arabi's view of spiritual and temporal love in their most refined forms. The life of Ibn 'Arabi, the man, evolves and takes shape against the background of a tumultuous historical period filled with wars and conflicts.”

Mohammed Hasan Alwan was born in Riyadh, Saudi Arabia, in 1979 and now lives in Toronto, Canada. In addition to A Small Death, he has published four novels: The Ceiling of Sufficiency (2002), Sophia (2004), The Collar of Purity (2007), and The Beaver (2011). The Beaver was shortlisted for the International Prize for Arabic Fiction 2013 and its French translation by Stéphanie Dujols went on to win the Arab World Institute’s Prix de la Littérature Arabe in 2015.

Alwan has also written a non-fiction book, Migration: Theories and Key Factors (2014). He was selected as one of the 39 best Arab authors under the age of 40 by the 2009–10 Beirut 39 project of the Hay Festival and Beirut World Book Capital and his work was published in the Beirut39 anthology. He was invited to join IPAF’s first nadwa (writers' workshop) in 2009, before becoming a mentor in 2016.

A Small Death is a fictional account of the life of Muhyiddin Ibn 'Arabi, from his birth in Muslim Spain in the 12th century until his death in Damascus. It follows his mystic experience and heroic travels from Andalusia to Azerbaijan, via Morocco, Egypt, the Hijaz, Syria, Iraq and Turkey.

The National wrote of the book: “Having a writer – especially one from Saudi Arabia – highlighting such a figure is remarkable at a time when we are in need of an open and frank conversation about religious interpretation.”

After his shortlisting, Alwan said in an exclusive film for IPAF:

“It might seem odd to choose to write a novel about Ibn ‘Arabi with all those extreme eastern concepts, whilst residing in this distant cold corner of the world in Canada. I often think about this. So, at first, I directly linked it to me feeling nostalgic, then I realised that being exposed to what is seemingly foreign or different is what drives me to reconnect with myself, as well as with my heritage and old culture.”

A Small Death was chosen by the IPAF judges as the best work of fiction published between July 2015 and June 2016, selected from 186 novels from 19 countries.

The five shortlisted finalists, Najwa Binshatwan, Ismail Fahd Ismail, Elias Khoury, Mohammed Abdel Nabi and Saad Mohammed Raheem were also honoured at the ceremony, receiving $10,000. Ahead of the announcement, the authors also took part in a series of events in Abu Dhabi for the Writers Union and NYU Abu Dhabi Institute.

Professor Yasir Suleiman, Chair of the Board of IPAF Trustees, comments:

“In well-paced steps, Mohammed Hassan Alwan's A Small Death draws the reader into the ups and downs of the life of its main character, the Andalusian Ibn ‘Arabi, in his journey of self-revelation through North Africa and the Middle East in a turbulent period of history with modern resonances. The novel captivates through the power of empathy, unadorned love and the crystal clarity of its gaze into the human soul.”

Fulfilling its ambition to increase the international reach of Arabic fiction, the Prize provides funding for the English translation of its winners. Last year’s winner Destinies: Concerto of the Holocaust and the Nakba by Rabai al-Madhoun will be published in English by AUC Press this autumn. Also this year, AUC Press published English translations of former shortlisted titles Baghdad Eucharist by Sinan Antoon (shortlisted as Hail Mary in 2013) and Embrace on Brooklyn Bridge by Ezzedine Choukri Fishere (shortlisted in 2012). Ahmed Saadawi's Frankenstein in Baghdad, which won in 2014, will be published in 2018 by Penguin Books in the US and by Oneworld in the UK. In total, 33 of the Prize’s winning and shortlisted novels have been translated into 24 languages.

The International Prize for Arabic Fiction is an annual literary prize for prose fiction in Arabic, which is recognised as the leading prize for literary fiction in the Arab world. The Prize is run with the support, as its mentor, of the Booker Prize Foundation in London and funded by Abu Dhabi Tourism & Culture Authority (TCA Abu Dhabi) in the UAE. The Prize is also supported by Etihad Aviation Group (EAG), which enables the shortlisted authors and judges to travel to the winner ceremony in Abu Dhabi.

Mohammed Hasan Alwan is a Saudi Arabian novelist, born in Riyadh, Saudi Arabia in 1979. He graduated with a doctorate in International Marketing from the University of Carleton, Canada. Alwan has published five novels to date: The Ceiling of Sufficiency (2002), Sophia (2004), The Collar of Purity (2007), The Beaver (2011), and A Small Death (2016), as well as a non-fiction work, Migration: Theories and Key Factors (2014). His work has appeared in translation in Banipal magazine ("Blonde Grass" and "Statistics", translated by Ali Azeriah), in The Guardian ("Oil Field", translated by Peter Clark), and in Words Without Borders ("Mukhtar" translated by William M. Hutchins). In 2009-10, Alwan was chosen as one of the 39 best Arab authors under the age of 40 by the Beirut39 project and his work was published in the Beirut39 anthology. He was also a participant in the first IPAF Nadwa in 2009 and a mentor on the Nadwa in 2016. In 2013, The Beaver was shortlisted for the International Prize for Arabic Fiction and in 2015, its French edition (translated by Stéphanie Dujols) won the Prix de la Littérature Arabe awarded in Paris for the best Arabic novel translated into French for that year.

A Small Death is a fictional account of the life of Muhyiddin Ibn 'Arabi, from his birth in Muslim Spain in the 12th century until his death in Damascus. It follows his mystic experience and heroic travels from Andalusia to Azerbaijan, via Morocco, Egypt, the Hijaz, Syria, Iraq and Turkey. Of a sensitive and anxious nature, Muhyiddin struggles with inner turmoil throughout the course of his travels. Witnessing fictitious events including savage military conflicts, he attempts to fulfil his mission against a backdrop of states and numerous cities where he meets countless people.

Mohammed Hasan Alwan will take part in his first public events as the winner of the Prize, alongside the five shortlisted authors at the book fair on Wednesday 26 April. These are:

· The Sea of Culture salon, 7pm

Further information on the above events, as well as additional events at the fair, can be found on the book fair’s website.