Shortlist for the 2015 International Prize for Arabic Fiction announced

The International Prize for Arabic Fiction has today (13 February) announced the six novels shortlisted for the 2015 Prize. These were selected from a longlist of sixteen novels, chosen from an original 180 entries.

Atef Abu Saif, Jana Elhassan, Lina Huyan Elhassan, Shukri al-Mabkhout, Ahmed al-Madeeni and Hammour Ziada were announced as the six authors shortlisted for the Prize, revealed by a judging panel chaired by renowned Palestinian poet and writer Mourid Barghouti at a press conference in Casablanca, in partnership with the Casablanca International Book Fair and the Moroccan Ministry of Culture.

In alphabetical order, the shortlisted novels are as follows: 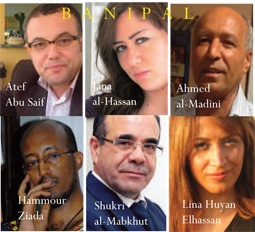 The Judges praised the effective and creative artistic techniques with which the writers approached their subjects. Such techniques included: adopting a flowing, quiet narrative when rendering the intricacies of a violent history (Floor 99); the widening, panoramic view offered of a tumultuous period of history, through a gripping and inspiring story (The Italian); the ability of a narrator to effectively portray the cruelties a society can inflict on its dispossessed minority (Willow Alley); delving into the complex and hidden recesses of a human soul which is grappling with the authority of the sacred, whether religious or secular (The Longing of the Dervish); a writer being able to undo fixed views by offering rich counter narratives, penetrating into the intricacies of social realities (A Suspended Life); and, finally, the shrewd narration that blends disparate life stories into one account of intertwined destinies (Diamonds and Women).

The shortlisted authors are a mixture of academics and journalists and range widely in age, with Ahmed al-Madeeni the eldest at 67 and Jana Elhassan the youngest at 30. There is one debut novelist, Shukri al-Mabkhout, with The Italian. One of the books, The Longing of the Dervish, was awarded the Naguib Mahfouz Medal for Literature in December 2014. Jana Elhassan has been shortlisted previously (for Me, She and the Other Women, 2013).

The winner of the International Prize for Arabic Fiction 2015 will be announced at an awards ceremony in Abu Dhabi on Wednesday 6 May, the eve of the Abu Dhabi International Book Fair. Delivering on its aim to increase the international reach of Arabic fiction, the Prize has guaranteed English translations for all of its winners: Bahaa Taher (2008), Youssef Ziedan (2009), Abdo Khal (2010), joint winners Mohammed Achaari and Raja Alem (2011), Rabee Jaber (2012), Saud Alsanousi (2013) and Ahmed Saadawi (2014).

The previously anonymous 2015 judges are: Mourid Barghouti (Chair), an award-winning Palestinian poet and writer; Ayman A. El-Desouky, an Egyptian academic; Parween Habib, a  Bahraini poet, critic, and media expert; Najim A. Kadhim, an Iraqi critic and academic; and Kaoru Yamamoto, a Japanese academic, translator and researcher.

Professor Yasir Suleiman, Chair of the Board of Trustees, said: "The novels on this year's shortlist feature a diverse range of characters and narratives stances and styles. They are all marked with subtlety of voice and force of vision. This list builds on the success of previous years in bringing quality Arabic fiction to wider audiences."

The International Prize for Arabic Fiction is awarded for prose fiction in Arabic and each of the six shortlisted finalists receives $10,000, with a further $50,000 going to the winner.  It was launched in Abu Dhabi, UAE, in April 2007, and is supported by the Booker Prize Foundation in London and funded by the Abu Dhabi Tourism and Culture Authority in the UAE. For more information about the Prize, you can also visit www.arabicfiction.org and follow the Prize on Facebook.

A Suspended Life (by Atef Abu Saif) is set in the Gaza refugee camp. Naim runs the only print shop in the camp, where he prints posters of martyred members of the community. When he is shot and killed by the Army, the fallout from his death changes the lives of the community living a quiet life on the fringes of the camp, where Naim's house sits on a small hill. The place has historical significance for the residents and, when the government plans to build a police station and mosque on the spot where Naim's house stands, it leads to a clash between the residents and the police.

Floor 99 (by Jana Elhassan) unfolds between the 1982 massacre at Sabra and Shatila in Lebanon and life in the city of New York in 2000. Majd is a young Palestinian man who bears a scar from the massacre. In present day New York, he falls in love with Hilda, a dancer, whose wealthy family from Mount Lebanon thrived on the power of the Christian right wing during the Lebanese civil war - who were directly linked to the massacre at Sabra and Shatila.

When Hilda decides to return to her village on Mount Lebanon to discover her roots, Majd is torn between mental images of the old enemy and his fear of losing her. He is forced to reflect on the painful events which took the life of his pregnant mother and turned his father, a teacher, into a rose-seller on the streets of Harlem. From his office on the 99th floor of a New York building, Majd's Palestinian identity seems ambiguous, especially given that he was born and has always lived in exile. The novel reflects on the power of love to cleanse hatred and brings the post-war Lebanese generation face-to-face with their ancestors.

Diamonds and Women (by Lina Huyan Elhassan) describes two generations of Arab exiles, revealing the secret, privileged world of Arab emigrants and showing their influence on their chosen cities of Paris, Sao Paolo and Damascus. The novel focuses particularly on Syrians living in Paris and Sao Paolo from the beginning of the 20th century to the 1970s and 1980s and the experiences of the heroine, Almaz, as she witnesses key points of Arab social and political history in the modern era.

At the heart of The Italian (by Shukri al-Mabkhout) is Abdel Nasser (nicknamed 'the Italian') and his mysterious assault on the Imam, his neighbour, during his father's funeral procession. The book's narrator attempts to uncover the motivations behind the attack, re-constructing his friend Abdel Nasser's troubled history from childhood. It looks at Abdel Nasser's time as a left-wing student at the University of Tunis, during the final years of the Bourguiba era and the beginning of Ben Ali's, through to the period of radical changes that subsequently rocked Tunisian society, when the dreams of a generation were torn apart by the fierce struggle between the Islamists and the Left. The novel reveals the mechanisms of control and censorship exercised through the press as well as the fragility of human beings, their secret histories and buried wounds.

Willow Alley (by Ahmed al-Madeeni) tells the story of a bustling, ancient Moroccan town which hides many secrets, where residents struggle to live in peace while at the mercy of a few arrogant and despotic individuals. Focusing on the struggle between the caretaker of a building under construction and a group of people clinging to their land in order to survive, the novel examines the individual?Æs right to exist in a country where lives are vulnerable to exploitation and the powerful thrive at the expense of the weak.

Set in 19th century Sudan during the collapse of the theocratic state, The Longing of the Dervish (by Hammour Ziada) follows the story of Bakhi Mindeel, a former slave newly released from prison and seeking revenge for his imprisonment. His release coincides with the end of the Mahdist war; a British colonial war fought between Egypt and a section of Sudanese society seeking independence under their religious leader, Mahdi, in which Mahdi and his followers are defeated and force to flee. The Longing of the Dervish examines the social conflict between white Christian and Islamic Sufi cultures in Sudan, exploring the concepts of love, religion, betrayal and political struggle.