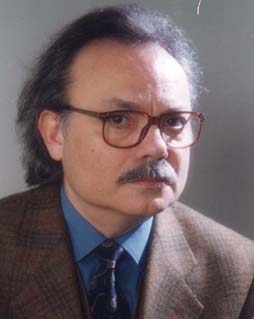 Ounsi el-Hage is best known around the world for being the co-founder, in 1957, with fellow poets Yusuf al-Khal and Adonis, of the famous Arabic poetry magazine Shi’r. And he was himself a major contemporary poet, pioneering the prose poem, and publishing the first compilation of prose poems in Arabic in his first poetry collection, Lan (Won't).

Based in Beirut, where he had been editor-in-chief of An-Nahar newspaper from the early 1990s until 2003, he had been suffering from a serious illness for a couple of months.

He will be also remembered as much for his many translations into Arabic of surrealist literature, notably André Breton and Antonin Arnaud, and his translations of plays by Shakespeare, Camus and Ionesco, as for his own collections of poetry and essays.

Banipal was pleased to publish an epic poem by him, translated by Brandel France and Adnan Haydar, in Banipals 5 and 6 in 1999. The Messenger with hair long to the springs is, as the poem itself says "the story of the other side of Creation". It is a tale of love and redemption in which the genesis of the world is reflected through the eyes of the woman Messenger.

Writing a profile of Ounsi El Hage in Banipal 5 to accompany the poem, Abdul Kader El Janabi explains how Ounsi El Hage's own page "Words, Words, Words" in An-Nahar's weekly supplement was in fact "a cry of revolt against all obstacles, whether social or literary, to imagination".

The Messenger with hair long to the springs begins: