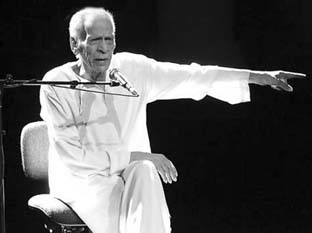 The Egyptian 'poet of the people' Ahmed Fouad Negm has died aged 84 in the early hours of Tuesday 3 December 2013 after a long fight against illness.

His funeral ceremony has taken place at the historic mosque of Imam Al-Hussien in old Cairo, after noon prayers. For photos of the funeral and reactions of the street from Al Ahram Online, click here.

Ahmed Fouad Negm was renowned for his sharp and witty vernacular verse, which protested the every-day sufferings of the ordinary Egyptian. He inspired generations of Egyptians, particularly after the 2011 revolution, with his outspoken poems, many turned to songs, against authoritarianism, poverty, corruption and power and was jailed a number of times for his criticism of the country's then presidents – Nasser, Sadat and Mubarak, writing his first lines of poetry while imprisoned.

Ahmed Fouad Negm was due to receive next week the award of Principal Laureate of the prestigious Prince Claus Fund Award for Arts and Culture.  The Fund has honoured him "for his independence, unwavering integrity, courage and rigorous commitment to the struggle for freedom and justice; for speaking truth to power, refusing to be silenced and inspiring more than three generations in the Arab-speaking world; for the aesthetic and political force of his work highlighting the basic need for culture and humour in harsh and difficult circumstances; and for his significant impact on Arabic poetry bringing recognition to the rich literary potential of the colloquial language." For more from the Prince Claus Fund on Ahmed Fouad Negm, click here.