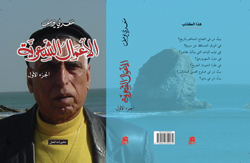 
The Collected Poetical Works (الأعماال الشعرية ) of Saadi Youssef comprises a mammoth 7-volume box set, in Arabic, which spans across a remarkable 62 years of poetical output (1952-2014).

Order your box set now direct from the publisher:

The collection was launched in June at the Mosaic Rooms in London, an event hosted by Banipal and the Mosaic Rooms that also marked the celebration of Saadi Youssef's 80th birthday. The evening was chaired by Omar al-Qattan, who opened the evening by speaking with Saadi Youssef about his childhood, his exilic life and living in London. This was followed by the reading of selections from his poetical collection, with Saadi Youssef and Stephen Watts alternately reciting in Arabic and English translation. 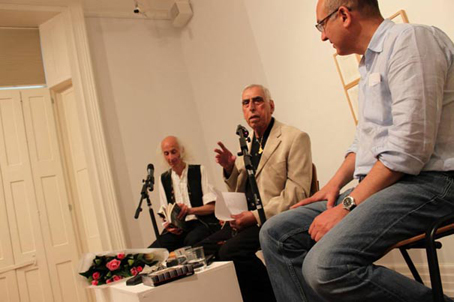 The poetry reading began with "The Vision", which opens prophetically:
This Iraq will reach the ends of the graveyard
It will bury its sons in open country.

The publication of these 7 volumes of poetry is a milestone for the 80-year-old poet, who began writing as a teenager. Upon hearing that the boxsets of his poetry had been published and were on their way to London, Saadi Youssef said:

The seven volumes of my poetical works contain what I have written between 1952 and 2014. They represent a life’s journey that is rich in hope, dangers and departures and is also a journey on the long road of art. Whosoever is interested in the aesthetics of contemporary Arabic poetry can trace my many steps in these volumes. It has been my good fortune to have lived a long life, to experiment ceaselessly and to continue doing so until now. Residing in London has accorded me support and a home. It has given me years of abundant output, tranquility and experiences in life and art. I will remain indebted to this country that has granted me peace and safety.