LIFE AND FREEDOM FOR ASHRAF FAYADH 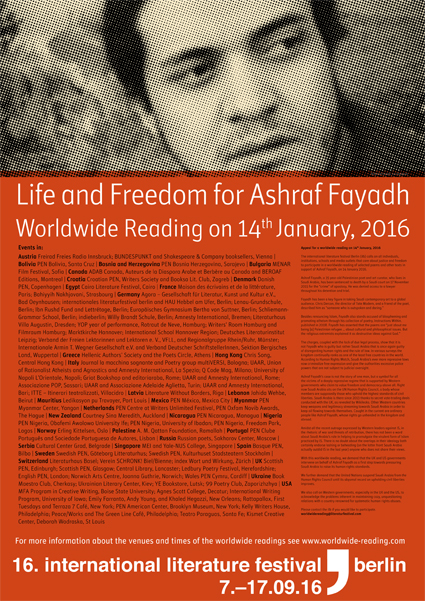 The International Literature Festival Berlin (ILB) calls on individuals, institutions, schools and media outlets that care about justice and freedom to participate in a worldwide reading of selected poems and other texts in support of Ashraf Fayadh on 14 January 2016.

Thousands of writers, artists and concerned individuals around the world have signed a number of appeals to the Saudi Arabian authorities to rescind the death penalty levied against Ashraf Fayadh.

For information about the venues and times of all the worldwide readings go to www.worldwide-reading.com

Ashraf Fayadh, a 35 year-old Palestinian poet and art curator, who lives in Saudi Arabia, and was born there, was sentenced to death by a Saudi court on 17 November 2015 for the “crime” of apostasy. He was denied access to a lawyer throughout his detention and trial.

He has been a key figure in taking Saudi contemporary art to a global audience. Chris Dercon, the director of Tate Modern, and a friend of the poet, described him as “someone who is outspoken and daring".

Besides being charged with renouncing Islam, Ashraf Fayadh also stands accused of blaspheming and promoting atheism through his collection of poetry, Instructions Within, published in 2008. Fayadh has asserted that the poems are "just about me being [a] Palestinian refugee ... about cultural and philosophical issues. But the religious extremists explained it as destructive ideas against God".

These worldwide readings demand that the UK and US governments in particular, intervene on behalf of Ashraf Fayadh. This demand will be a first step towards pressuring Saudi Arabia to raise its human rights standards. The worldwide readings initiated by the ILB will also make the demand that the United Nations suspend Saudi Arabia from the Human Rights Council until its abysmal record on upholding civil liberties improves.

To let the ILB know you are organising a reading, email here:worldwidereading@literaturfestival.com

For all information about the readings initiated by www.worldwide-reading.com, set up in 2006, click here