Banipal 47 - Fiction from Kuwait, out now in print and digital 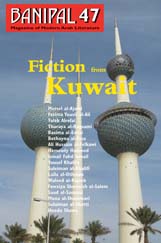 Fiction from Kuwait presents a selection of contemporary literature from the novels and short stories of 17 Kuwaiti authors. It spans the generations of literary voices, from the 1960s and the writings of Sulaiman al-Shatti, Ismail Fahd Ismail and Suleiman al-Khalifi, to works by Fatima Yousif al-Ali, Laila al-Othman, Waleed al-Rajeeb, Taleb Alrefai, Thuraya al-Baqsami and Fawziya Shuwaish al-Salem, and then to those by young authors Bothayna al-Essa, Saud al-Sanousi, Yousef Khalifa, Basima al-Enezi, Ali Hussain al-Felkawi, Hameady Hamood and Mona al-Shammari.

Almost the entire issue is devoted to the fiction literary scene in Kuwait today – with background articles on the development of both the short story and the novel. It is a vibrant scene, with many of the authors turning out easily to the rest of the world, creating narratives of continuous and diverse dialogues on many levels – person to person, person to place, person to memory, memory to place. They discuss issues of expectation and surprise, loss and denial, love and marriage, humour, satire and melancholy, family traditions and relations, social mores and taboos, different cultures, environments, generations and geographies.

The development of Kuwaiti literature has gone hand in hand with the growth of modernism and education in the country. The establishment of the first state school in 1911, the inauguration in 1928 by the distinguished intellectual and modernist reformer Abdul-Aziz al-Rasheed of Majallat al-Kuwait (Kuwait Magazine) – the first magazine published in the Arabian Gulf, the establishment, later, of literary associations and newspapers, and then in 1946 Al-Bi’tha (The Scholarship) magazine, all created a strong foundation for the literary generations that followed – from Independence in 1961 until today, when post-oil Kuwait has “spawned a diversity of literary innovations".

Among the Book Reviews in Banipal 47 are reviews of novels by two past winners of the International Prize for Arabic Fiction: Andrew C Long reviews Saudi Arabian author Abdo Khal’s winning novel Throwing Sparks, and Mona Zaki reviews The Mehlis Report by Lebanese novelist Rabee Jaber (his winning novel The Druze of Belgrade has yet to be translated). Also a new translation of That Smell, with Notes from Prison by Sonallah Ibrahim, reviewed by Paul Starkey, while Margaret Obank reviews Sun Bread and Sticky Toffee: Date Desserts from Everywhere by Kuwaiti-born Sarah al-Hamad.


• Find out more about Banipal 47 - Fiction from Kuwait on our home page.

• For full details of all contents and links to contributors’ pages, please go to the current issue page.

• Banipal 47 – Fiction from Kuwait is available in print (as a subscription or a single issue) or digital format (subscription).