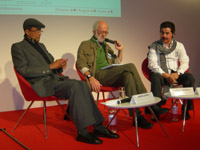 Born in Tübingen, Germany, in 1944, in 1972 Hartmut Fähndrich moved to Switzerland, where he still lives. He studied Comparative Literature and Islamic Studies in Germany and the USA and taught Arabic language and civilization at the Swiss Federal Institute of Technology in Zurich (ETH Zurich) from 1978 to 2014. He was for many years Series Editor of Arabic Literature in Translation at Lenos Verlag, and has in recent years has been a consulting editor of Banipal magazine.

He has been translating contemporary Arabic literature without stop since the mid-1980s, and in 2008 achieved the publication of his fiftieth literary translation . His forte is novels and short stories – mainly from Palestine, Lebanon, Egypt and Libya. Banipal 32 includes an interview with him on being a literary translator of contemporary Arabic literature. For a full list, on his own website, of now more than 60 novels, and dozens of articles and other works he has translated (books listed in bold) from Arabic into German click here.

English readers are waiting, patiently or otherwise, for English translations of some of his many titles, to be published.