From September 25 to 30, 2018, the IV international literature festival will be held in Odessa. During these days, the city’s residents and guests are invited to attend readings and discussions with writers from 13 countries.

The main purpose of the festival is to emphasize the cultural significance of Odessa and its multicultural character, as well as to strengthen ties between Odessa and other cultural metropolises in Europe and the world.

The festival programme will present well-known and prize-winning authors from Austria, Germany, Great Britain, Hungary, India, Iraq, Netherlands, Poland, Russia, Serbia, Switzerland, Ukraine and USA. The readings will be held at the Odessa Literary Museum, at the POTEMKIN STAIRS and at TERMINAL 42. 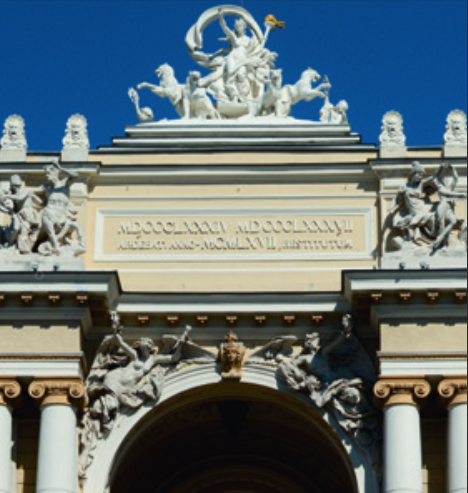 FREE ADMISSION TO ALL EVENTS!

As in previous years, the festival will feature a special section aimed at young readers with children's authors from four different countries presenting their books. The events of the section “International Children’s and Young Adult Literature” will take place at the Odessa Puppet Theater-, as well as in local schools.

»What matters« features 30 artists and students from different countries, including Vivienne Westwood, Nina Hoss, Can Dündar, Patti Smith, Simon Rattle, Ai Weiwei, Elfriede Jelinek, and David Grossman, who each read one article of the Universal Declaration of Human Rights. The film has so far been subtitled in the following languages: Arabic, Chinese, German, English, French, Hindi, Russian, Spanish and Turkish. It will be released around the world on the 70th anniversary of the Declaration of Human Rights on December 10th, 2018. It has already screened at Innsbruck International Biennial of the Arts, the American Film Festival New York [TAFFNY], as part of the »MENSCHENRECHTE. MEINE RECHTE. DEINE RECHTE. AUSGELÖST!« exhibition at the German Foreign Office, at the 22nds [Auswärtiges Amt], the 03. international literaturfestival odessa and at the 23rd Leukerbad International Literary Festival.  [WITH RUSSIAN SUBTITLES]

16 00 – 17 00      Samuel Shimon and BAGHDAD NOIR, the newly released Anthology of short stories by Akashic Books. Samuel Shimon will read from the anthology, which is a collection of 14 stories, each dedicated to a certain district or place in the Iraqi capital. The anthology is a portrait of one of the world’s most war-torn cities with most of the stories are set after the US’ invasion of Iraq in 2003.

Seldom have personal fate and German history been so tightly woven together as in the life of songwriter and poet Wolf Biermann who, as Helmut Schmidt said, »has contributed a piece of German identity«. In his autobiography, »Warte nicht auf bessre Zeiten!« [tr. Don’t Wait for Better Times!], Biermann describes his life between East and West Germany as well as that of his Communist Jewish father, who was murdered at Auschwitz, and his mother, who rescued him from the inferno of bombed and burning Hamburg.

Vera Pavlova’s poetic texts, which have been translated into 20 languages, turn traditional idioms upside down and showcase the sounds of the words in new expressions.

Gerhard Falkner is known for his old-fashioned poems, his ways of overwriting, his mixing of different registers, and the distortion of sounds. He will read from the cooperative publication »Ignatien – Elegien am Rande des Nervenzusammenbruchs« [Ignatias – Elegies on the Edge of a Nervous Breakdown].

After settling in Paris in 1985, Samuel Shimon and his publishing house Gilgamesh Editions released a series of volumes of Arab poetry and prose, including his own collection of poems »Old Boy« [1987], and »The Assyrian Boy« [2018] from which he will present selected texts.

In his most recent book »Shel« [tr: The Gap] the Nabokov Prize-winner Viktor Erofeyev asks questions of existence, analysing the limits of belief and knowledge, death and immortality, reason and madness, and love and cynicism, offering a new perspective on Chekhov, the Marquis de Sade, Rimbaud, as well as other European writers.

Conversation with Anne Thomas, international coordinator of the »Stolpersteine« project and Volodymyr Viatrovych, director of the Ukrainian Institute of National Remembrance.