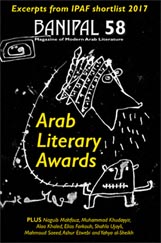 The first issue of 2017, our 20th year of continuous publication, includes features, the return of our Literary Influences column, and works by a range of authors, as well as its title feature.

It opens with Sally Gomaa in conversation with Egyptian author and essayist from Alexandria Alaa Khaled, founder of Amkenah magazine, whose works always defy boundaries, and includes an intriguing chapter from his autographical first novel.

The short story from veteran Iraqi author Muhammad Khudayyir, entitled “The Three Wise Men”, retells in his own way the ancient Akkadian epic of Atraharsis, invoking the ancient Mesopotamian gods of Ea, Shamash and Sin, al-Jahiz and Basra’s poet hero Badr Shakir al-Sayyab. This is followed by Shahla Ujayli’s very short story that is packed with ideas, images, situations and concepts while reliving a nightmare.

There is a splendid story by Naguib Mahfouz, published four years before he became a Nobel laureate, the title story of the collection The Secret Organisation, in which secret “family” cells require complete obedience in carrying out their demands, working as they say for “Perfection, Love, Obedience”, striving to come nearer and nearer the Supreme Leader, but never managing it.

The chapter from Jordanian author Elias Farkouh’s novel Drowned in Mirrors has the protagonist, retired builder Shakib Effendi, wondering if changing his walking route on the very day the Prime Minister was assassinated was a sign. He had risen early, as usual, and was waiting to meet his old friend Hafeedh from his days in Haifa, where Shakib had first heard “Star of the East” Umm Kulthum sing, but instead there were enormous explosions . . .

Iraqi author Mahmoud Saeed, who has five of his 20 novels in English translation, writes in his Literary Influences essay how Mosul Public Library, recently found ransacked and destroyed by ISIS, was where he discovered and read great literature. Libyan poet Ashur Etwebi writes a lyrical essay describing how Iraqi-Norwegian artist Yahya al-Sheikh (our cover artist) captures the essential spirits of day and night in his unusual drawings, many of which are reproduced in the essay.

We include a tribute by Stefan Weidner to our dear friend Hussain al-Mozany, who died suddenly last December. Till now we can hear his voice in our heads, his laughter, we can picture his serious mien, his humour, his quiet endurance and his enthusiasm for learning English. Banipal also pays tribute to Herbert Mason, a consulting editor for many years, and finds a space here to remember with sadness our colleague Ben Hollander and his untimely passing in November 2016.

As usual in the Spring issue of Banipal, we present excerpts from the six shortlisted novels of the 2017 International Prize for Arabic Fiction – the winner will be revealed at the award ceremony on 25 April in Abu Dhabi. This year, the prize, described as the “most prestigious and important literary prize in the Arab world”, reaches its 10th year of rewarding “excellence in contemporary Arabic creative writing” and encouraging the reading of “high quality Arabic literature internationally through translation”.

Complementing the forthcoming award ceremonies of two of the biggest Arab literary awards, and not forgetting also the Saif Ghobash Banipal Prize for Arabic Literary Translation, which is starting its 12th year of awards, Banipal’s title feature Arab Literary Awards, presents views and opinions from around the Arab world on the impact of the growing number of Arab literary awards on encouraging reading, on creative writing and on the literary scene. Banipal magazine, from the beginning, has not taken any position itself, but its pages have been opened up for publishers, critics, authors, and literary journalists to express their thoughts freely on this hot topic. All of the articles, bar one, were written especially for this feature. Khalil Suweileh’s article that he published in the Lebanese Al-Akhbar, is reproduced here in translation with his permission.

Cultural editor Abdo Wazen, in Beirut, writes that there has been “an unprecedented upsurge in literary awards” in the Arab world, heavily funded ones, and when you look at who the winners are they are turning out to be “democratic and inclusive awards”. The most effective prize for him is the IPAF which has “lent vigour, enthusiasm and passion to the literary scene in the Arab world”, and he concludes that that is only because of the prize’s association with the UK Booker Prize.

Fatma Alboudy, publisher of Dar Al-Ain in Cairo, takes a long view of the IPAF prize in terms of how it has affected Arab publishing both positively and negatively. Ibrahim Farghali looks at the revival of the novel genre as a result of these relatively new literary awards and the general impetus they have given to increasing readers. But he warns that awards need “to regularly revise their procedures to protect authors’ rights and to maintain their credibility”.

Publisher Hassan Yaghi is an adroit observer of the Arab literary scene and the impact of prizes on readers. He assesses how the IPAF prize has enabled winning works “to appeal to the readers”, with relatively unknown authors becoming widely known after winning. However, he writes that he is “duty bound” to put forward suggestions to boost the status of IPAF, the main one being the addition of missing readers to the judging panels.

Apart from the biennial Al Owais Prize, which was set up in 1988 by the Sultan Bin Ali Al Owais Cultural Foundation, with five categories of awards for achievements rather than specific works, most of the major Arab literary prizes have been established in the last decade or so, indicating an important shift. In 1996, the Naguib Mahfouz Medal for Arab Literature was launched by the AUC Press, and is awarded every 11 December, the Nobel laureate’s birthday.

In 2006, the hugely funded (US $1.9m) Emirati Sheikh Zayed Book Award was launched with nine categories, not all awarded each year. In the last couple of years the Award has introduced long lists and short lists before the announcement of the winners. This strategy makes prizes more attractive and grips people’s attention. Increasing the appeal of a literary prize to the reading public should perhaps be the top priority for prize administrators. However, after the shortlists have come suggestions to make awards to those shortlisted, with the huge prize pot for the winner being redistributed to enable such additional awards. The SZBA, about to make its 11th edition of awards, is a very important prize in the Arab world. It keeps on developing and improving its public image and reputation, and hopefully this can continue with more openness regarding its judging systems and the widening of awards offered.

A point made by a number of the contributors above is that increasing readers is one of the important purposes of prizes, and that is what the International Prize for Arabic Fiction, above all others, has succeeded in doing. Launched in 2007 in Abu Dhabi, for the first time an Arab literary award explained all its procedures from the start, and reached out to the public with a long list, a short list and then winner, with the panel of judges named for all to know. These open procedures were new in the Arab world, as many contributors bear out.

Since 2014 two prizes, also hugely funded, have emerged from Doha, Qatar, one for the novel – Katara Prize for the Arabic Novel, and the other for translation into and out of Arabic and for organisations working in and promoting translation from Arabic – Sheikh Hamad Award for Translation and International Understanding.

A final word from Fadia Faqir, who writes her novels in English, and in this issue reflects on being a judge for the inaugural Al-Multaqa Prize for the Arab Short Story. She writes that she “thoroughly enjoyed the experience of reading 184 collections of short stories and further exploring the literary map of the Arab world” and concludes with a comment that Banipal can wholeheartedly agree with, that “in an Arab world riddled with wars, civil and uncivil, and conflicts, to pick up a pen and write is a triumph in itself”.

Comments on the Literary Awards feature by readers, prize administrators, judges and nominees are very welcome. Just email them to editor@banipal.co.uk.