Mahmoud Darwish: The Poet’s Art and His Nation

Mahmoud Darwish: The Poet’s Art and His Nation 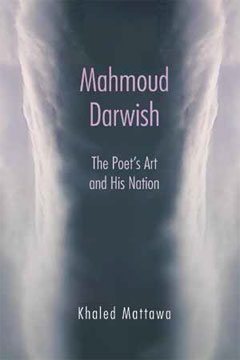 "Written with fluidity that does justice to the poet he analyzes, Khaled Mattawa’s Mahmoud Darwish: The Poet’s Art and His Nation is a superbly constructed book that contextualizes Darwish’s language, aesthetics, structures, and devices. Mattawa treats these complexities with tremendous skill, framing his critique of Darwish in a larger framework of poetry’s role in the political and cultural discourses that shaped Palestinian identity."—Steven Salaita, author of Modern Arab American Fiction: A Reader’s Guide

"Mattawa’s homage to Mahmoud Darwish, through a very intelligent and perceptive reading of some of his most important poems, reveals a very human side to one of the greatest voices in modern Arabic poetry."—Terri DeYoung, Department of Near Eastern Languages and Civilization, University of Washington.

In Mahmoud Darwish: The Poet’s Art and His Nation, Mattawa pays tribute to one of the most celebrated and well-read poets of our era. With detailed knowledge of Arabic verse and a firm grounding in Palestinian history, Mattawa explores the ways in which Darwish’s aesthetics have played a crucial role in shaping and maintaining Palestinian identity and culture through decades of warfare, attrition, exile, and land confiscation. Mattawa chronicles the evolution of his poetry, from a young poet igniting resistance in occupied land to his decades in exile where his work grew in ambition and scope. In doing so, Mattawa reveals Darwish’s verse to be both rooted to its place of longing and to transcend place, as it reaches for the universal and the human.

Khaled Mattawa was born in Benghazi, Libya in 1964 and emigrated to the USA in his teens in 1979. He is the author of four books of poetry, Tocqueville (New Issues Press, 2010), Amorisco (Ausable Press, 2008), Zodiac of Echoes (2003), and Ismailia Eclipse (Sheep Meadow Press,1996). Mattawa has translated eight volumes of contemporary Arabic poetry, Adonis: Selected Poems (2010); Shepherd of Solitude by Amjad Nasser (2009), pubilshed by Banipal Books; These Are Not Oranges, My Love by Iman Mersal (2008); A Red Cherry on A White-Tiled Floor by Maram Al-Massri (2004, 2007); Miracle Maker (2003)  and In Every Well A Joseph Is Weeping (1997) by Fadhil al-Azzawil; Without An Alphabet Without A Face by Saadi Youssef (2002); Questions and Their Retinue by Hatif Janabi (1996). Mattawa also co-edited Dinarzad’s Children: Anthology of Contemporary Arab American Fiction (2004, 2009) and Post Gibran: New Arab American Writing (1999).

His translation of Adonis: Selected Poems won the 2011 Saif Ghobash Banipal Prize for Arabic Literary Translation, and was shortlisted for the 2011 International Griffin Prize for Poetry.