Launch of The Storyteller of Jerusalem 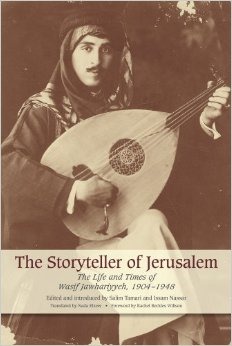 The Storyteller of Jerusalem
The Life and Times of Wasif Jawhariyyeh, 1904-1948

Edited and introduced by Salim Tamari and Issam Nassar translated by Nada Elzeer, with a foreword by Rachel Beckles Willson

Time and place: Thurs 23 Jan, 7 pm at The Mosaic Rooms

The Mosaic Rooms is pleased to host the UK launch of the memoirs of Wasif Jawhariyyeh, a remarkable treasure trove of writings on the life, culture, music, and history of Jerusalem. The book will be introduced by talks by Dr. Nada Elzeer (translator), Michel Moushabeck (publisher and editor), and Professor Rachel Beckles Willson (author of the foreword).

Spanning over four decades, from 1904 to 1948, the book reflects on the times of Ottoman rule, the British mandate, and the run-up to the founding of the state of Israel from the daily vantage point of the street storyteller. Oud player, music lover and ethnographer, poet, collector, partygoer, satirist, civil servant, local historian, devoted son, husband, father, and person of faith, Wasif viewed the life of his city through multiple roles and lenses. The result is a vibrant, unpredictable, sprawling collection of anecdotes, observations, and yearnings as varied as the city itself.