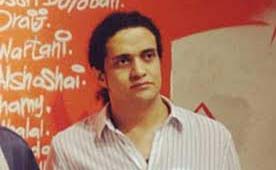 Poets, writers, arts and literature organisations from around the world have called on the Saudi authorities to immediately release the poet Ashraf Fayadh, who has been sentenced to death for apostasy by the Saudi judiciary.

The calls have been gathering speed this week as arts and literary figures around the world have been horrified and outraged by the turn of events as the sentence of execution was passed on this young poet. Without hesitation, Banipal joined the calls.

Ashraf Fayadh is a poet, artist, and curator who works with the British-Saudi arts organisation Edge of Arabia. Born in Saudi Arabia into a Palestinian family Ashraf Fayadh was first detained in August 2013 after a complaint was received by the Saudi Committee for the Promotion of Virtue about his poetry collection Instructions Within. That time he was released on bail, but then was rearrested in January 2014, when his ID card was confiscated and in May 2014 he was sentenced to four years in jail and 800 lashes. His appeal against this failed and a retrial was ordered.

At the retrial in November 2015 the previous ruling was reversed by the judge, who declared that Ashraf Fayadh's repentance was not enough, and declared a verdict of the death penalty. Ashraf Fayadh has been given one month in which to make an appeal, but still has no access to a lawyer without his ID documents.

PEN has called for all charges against him to be dropped entirely.

A letter to the Saudi authorities signed by over 60 organisation, and a statement of support from poets and writers, were delivered to the Saudi Arabian Embassy in London on Friday 27 November by representatives of English PEN.

We, the undersigned organisations, all dedicated to the value of creative freedom, are writing to express our grave concern that Ashraf Fayadh has been sentenced to death for apostasy.

Ashraf Fayadh, a poet, artist, curator, and member of British-Saudi art organisation Edge of Arabia, was first detained in August 2013 in relation to his collection of poems Instructions Within following the submission of a complaint to the Saudi Committee for the Promotion of Virtue. He was released on bail but rearrested in January 2014.

According to court documents, in May 2014 the General Court of Abha found proof that Fayadh had committed apostasy (ridda) but had repented for it. The charge of apostasy was dropped, but he was nevertheless sentenced to four years in prison and 800 lashes in relation to numerous charges related to blasphemy.

At Ashraf Fayadh’s retrial in November 2015 the judge reversed the previous ruling, declaring that repentance was not enough to avoid the death penalty. We believe that all charges against him should have been dropped entirely, and are appalled that Fayadh has instead been sentenced to death for apostasy, simply for exercising his rights to freedom of expression and freedom of belief.

There are also widespread concerns over an apparent lack of due process in the trial: Fayadh was denied legal representation, reportedly as a result of his ID having been confiscated following his arrest in January 2014. It is our understanding that Fayadh has 30 days to appeal this latest ruling, and we urge the authorities to allow him access to the lawyer of his choice.

We call on the Saudi authorities to release Ashraf Fayadh and others detained in Saudi Arabia in violation of their right to freedom of expression immediately and unconditionally.

For more from PEN International on the campaign for Ashraf Fayadh, click here