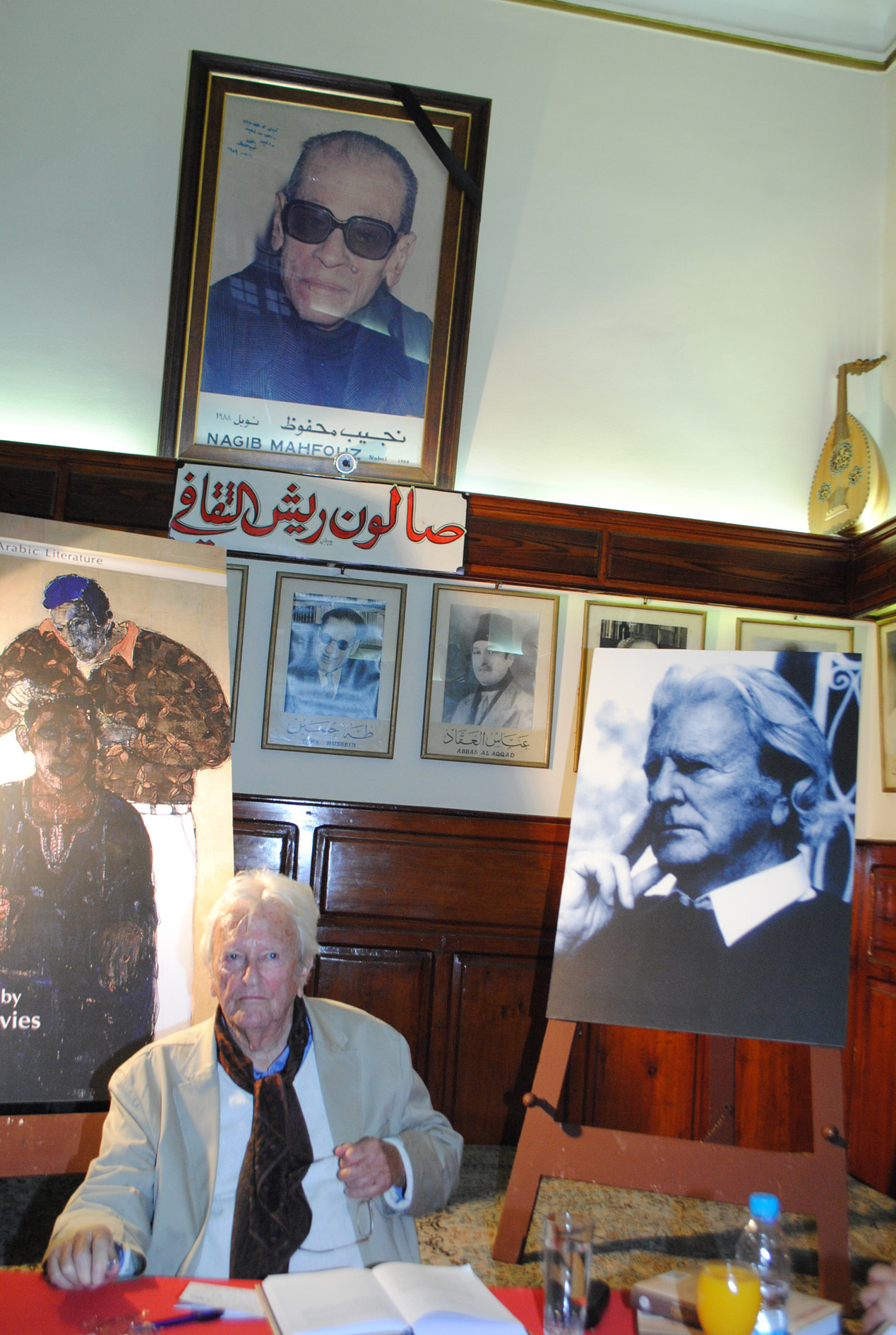 One year has passed, and by a strange coincidence, on 22 May this year (2018) I was celebrating contemporary literature in translation. That evening I was at the award ceremony of the Man Booker International Prize, hoping that the shortlisted Iraqi author Ahmed Saadawi, whose novel Frankenstein in Baghdad, translated by Jonathan Wright, would be the winner.  I did wonder whether Denys might get a mention from the Man Booker Judges, but that was a wild card, and not to be.

However, at this time we remember Denys Johnson-Davies. He, a dear friend, an author, a reader and an indomitable, pioneering translator. His love of literature, his friendships with authors, with Banipal, and his long years in Cairo and Marrakech, marked him out as someone very special. The descriptions of him have piled up – pioneer, doyen and dean of translators, excellent standard-bearer, unique figure, master artist, the great model for translators – his achievement was seminal, and we are all in massive debt to him, not least for the ease with which he moved between the living languages of Arabic and English.

It was a chance remark from Denys that he had just published his last volume of translations which set in motion Banipal 43 – Celebrating Denys Johnson-Davies, published Spring 2012. It was the celebration of a man who has spent a good part of his life with Arab authors and their works, who has influenced and inspired countless readers of world literature, not to mention generations of literary translators.

For Denys, translation was always “first and foremost an art, not a science”, translators being the essential lynch-pin in the cultural world from the earliest days, though when I interviewed him getting on for 20 years ago he was lamenting, like many of us then, the “deplorable” situation for the translator from Arabic and the fact that there was no encouragement given to the translator of fiction from Arabic to English.

Today, the world of literary translation from Arabic to English is almost unrecognisable – it is so changed, so charged with the energy of young translators in the making, who come from many different walks of life – and in a way these changes complement the explosion in creative writing that’s been taking place throughout the Arab world.

Denys has been one of the unwitting catalysts for change by persevering with translating and bringing to the anglophone world an array of interesting, powerful writers. Not for nothing has he also been described as a “talent-spotter”.

In saluting Denys Johnson-Davies as an author, reader and indomitable pioneering translator, I would like to now remember him, from that Banipal issue, one year after his passing, in his own words:

"It has become to be recognized that translation is not merely a matter of putting one word in the place of another. I remember when I translated my first book, a selection of stories by Mahmoud Taymour, taking some of it to a friend of mine. Though he had no knowledge of Arabic, I admired his wide reading in English literature. I was pleased when he said some complimentary words about Taymour’s stories, but not so happy when he criticized my translation. He then made the remark that the art of translation was transmitting the meaning from one culture to another, rather than from one language to another. Let me give you two examples, both being translations of books I had done. Thus I remember being criticized for translating Tawfiq al-Hakim’s play Al-Sultan al-Ha‘ir as The Sultan’s Dilemma, which, in my opinion, is a more attractive title than the literal translation of “The Perplexed Sultan”. There was also a novel by Naguib Mahfouz which I translated, giving it the English title of Arabian Nights and Days; I did this in the knowledge that the English reader knew of the Arabic classic under the name “Arabian Nights” and not A Thousand and One Nights.

"I suppose the main changes that have occurred in Arabic literature is the use of colloquial language in the writings of many authors, especially where dialogue is concerned. I remember discussing this matter with Naguib Mahfouz and arguing that it was ridiculous to have a peasant talking in classical Arabic, and his answer always was that if he used Egyptian dialect much of his writing would not be understood by non-Egyptian readers.

"My Sudanese friend Tayeb Salih wrote several works of real talent that are among my favourites. I remember that I had sent several of my translations of Arabic short stories to the magazine Encounter that was considered the leading literary magazine of its time. Not a single one was accepted for publication until Tayeb sent me a story for publication in the Arabic magazine Aswat that I was editing at the time. I published the story in Aswat and immediately translated it and sent my translation to Encounter. I was not surprised when it was accepted for publication, and that magazine later published two more of Tayeb’s stories that I translated. I was also not surprised when his novel Season of Migration to the North found its way into the Penguin classics series. It is strange that Tayeb himself considered Bandarshah as his best piece of writing, but it has gone almost unnoticed by both critics and readers.

"Arabic literature has come a long way in a short time. Let us not forget the writings of Naguib Mahfouz and Alaa al-Aswany, for instance. And there are now other writers of real talent springing up around us. It is for translators and readers to recognize them when they appear."

We have maintained our digital edition of Banipal 43 as available for free reading. Click on the front cover to access it. 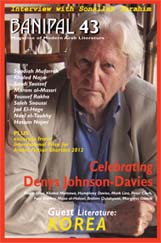