enquiries@asiahouse.co.uk or contemporaryarabfiction.eventbrite.co.uk
Produced by International Prize for Arabic Fiction 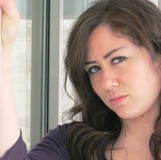 The Lebanese Jana Elhassan and Saudi Arabian Mohammed Hassan Alwan were both shortlisted for the 2013 International Prize for Arabic Fiction (IPAF).

The authors’ work explores the complications of family life and themes of migration, memory and destiny.  In Elhassan’s Me, She and the Other Women, a woman left frustrated and lonely by her marriage constructs a new identity in her imagination.  Hassan Alwan’s The Beaver plots a man’s memories of a fragmented and troubled family history as he embarks on a series of fishing trips in the USA, far from his Saudi Arabian homeland.

Elhassan and Hassan Alwan discuss their work and the contemporary literary scene in the Middle East and wider Arab world.

Click on the links to read Mohammed and Jana's interviews with Asia House.