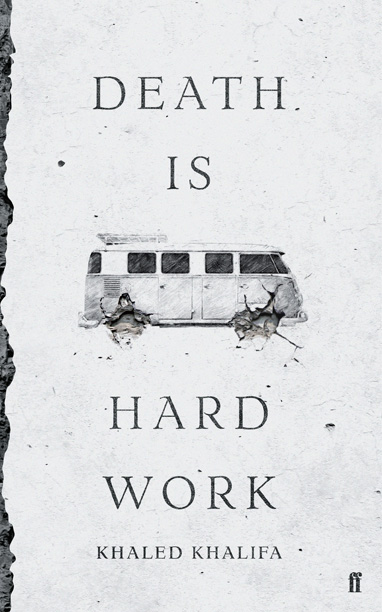 “A subtle translation that is both sharp and unobtrusive”

The 2019 Saif Ghobash Banipal Prize for Arabic Literary Translation is awarded to Leri Price for her translation of the novel Death is Hard Work by Syrian author Khaled Khalifa, published by Faber & Faber. Following the shortlist of four titles that was announced on 2 December 2019, the judges are unanimous in naming Leri Price as the winner of the £3,000 prize, to be awarded by the Society of Authors on 12 February 2020.

The judging panel comprised fiction writer and publishing editor Ghazi Gheblawi (Chair); poet, novelist and publisher Jan Fortune; university lecturer and translator Abla Oudeh; and writer, critic and former deputy director of English PEN Catherine Taylor. For more information about the judges go to this link: https://www.banipaltrust.org.uk/prize/judges2019. The prize is administered by Paula Johnson, Head of Prizes and Awards at the Society of Authors.

Leri Price deserves the highest commendation for her achievement in conveying the vividness and the intense style of Khaled Khalifa’s compelling novel about survival and humanity in modern-day Syria in a subtle translation that is both sharp and unobtrusive. Price was successful in dealing with the intricacies and nuances of a narrative that takes us into a world of chaos, thrill and tragedy, a world imbued with the absurd and the horrific. The judges noted particularly that the translation succeeded in conveying all aspects of the author’s enthralling text, in which lyrical prose combines with the forensic nature of reportage, in a seamless and smooth manner.

The judges considered Death is Hard Work a beautifully and tightly written novel and a strong depiction of the conflict in Syria through the quest of three siblings to honour the last wishes of their deceased father that he be buried in his home village, across the country through war and torment. Their journey, which deftly mirrors the conflict outside their minibus, brings out the dysfunctional relationships of the family. Khalifa’s metaphorical and condensed narrative presents the tragedy of the wider crisis in the region. Layered and absurd, the novel captures a sense of claustrophobia, unravelling with pitch-perfect prose.

The judging panel of the 2019 Saif Ghobash Prize were honoured to have read and discussed this year’s entries. They stressed that all four finalists were works of high quality by accomplished and emerging authors and translators, but reached a unanimous decision to award the accolade to Leri Price’s exceptional translation. Death is Hard Work is an audacious work, which they felt would stand the test of time as a modern classic of an era of uprisings, conflict and civil strife.

Reactions from the winning translator, author and publisher

“Simply being on the shortlist among such translators as Marilyn Booth, Humphrey Davies and Jonathan Wright was an incredible feeling, and I still feel a bit overwhelmed. For me, this is a testament to Khaled’s unique, humane and vitally important writing – it is every translator’s dream to have such a text to work with. It was a privilege for me to have translated Death is Hard Work and as ever a joy to work with Khaled. I hope this prize helps more people to find and enjoy his work.”

“I cannot hide my delight and excitement at the news that my friend and translator Leri Price has won this prize, the reputation of which grows with every passing year. Leri Price has developed greatly as a translator over the last ten years, and her constant diligence and patience render her highly deserving of all recognition. Thank you to the judging panel, to Banipal and those involved with the Saif Ghobash Banipal Prize for this honour, both to my translator and novel.”

“Despite the persistent tragedy that exists in Syria, Khaled Khalifa brings relief by writing with clarity, hope and literary bravura in his fiction. Faber & Faber is proud to be his publisher in English, and for Death is Hard Work to be honoured with the Saif Ghobash Banipal Prize is a triumph. It is a powerhouse of a novel, depicting the quotidian horrors of civil war with a gaze that is humane, piercing, true.”

Khaled Khalifa is a Syrian novelist, screenwriter and poet who has resolutely remained living in Damascus despite the civil war, now in its ninth year. Khalifa was born in a village near Aleppo, Syria, in 1964, the fifth child of a family of thirteen siblings. He has a BA in Law from Aleppo University, and was a founding editor of the literary magazine Alif. His first novel Haris al-Khadi’a (The Guard of Deception) appeared in 1993, followed in 2000 by Dafatir al-Qurbat (The Gypsies’ Notebooks). His 2006 third novel, Madih al-Karahiya, was the first to be translated into English, by Leri Price, under the title In Praise of Hatred (Doubleday, 2012). The Arabic original was shortlisted for the inaugural IPAF in 2008 and Price’s translation was longlisted for the Independent Foreign Fiction Prize in 2013. Price then translated Khalifa’s 2013 novel No Knives in the Kitchens of This City (Hoopoe Fiction, 2016), which was shortlisted for the Saif Ghobash Banipal Prize in 2017. The Arabic original won the AUC Press’s Naguib Mahfouz Medal for Literature in 2013 and was shortlisted for the 2014 IPAF. Khalifa’s 2016 novel Death is Hard Work appeared in Price’s English translation in 2019 and was a finalist for the 2019 US National Book Award for Translated Fiction. Khalifa’s latest novel is Lam Yasulli ’alayhum Ahad (No One Prayed over their Graves), published this year by Hachette-Antoine/Naufal (Lebanon) and Dar Al-Ain (Egypt), and longlisted for the 2020 IPAF. In addition to his novels, Khalifa has written numerous scripts for TV dramas and films, several of which have won awards.

It is the winter of 2014, and against a backdrop of falling bombs the elderly Abdel Latif al-Salim dies in a hospital in Damascus. During his final hours he entrusts his son Bolbol with a final request: to be buried beside his sister Layla in their ancestral town of Anabiya, near Aleppo. Seeing no alternative but to honour his father's dying wish Bolbol agrees to the tasks and, with the help of his siblings Hussein and Fatima, embarks on a 200-mile journey to transport Abdel Latif's body to its final resting place. Ordinarily the trip would take a few hours – indeed, Hussein estimates that they will reach their destination by midnight. But three years of relentless siege have left the region in chaos. With their dead father in the back of Bolbol’s minibus, Bolbol, Hussein and Fatima must travel through abandoned towns and streets that have been reduced to rubble, passing mass graves of unidentified civilians and soldiers, lurching from checkpoint to checkpoint, trapped in vast traffic jams among a “mass exodus, hundreds of thousands of people heading from the north and the east towards the unknown”. The journey, in the end, lasts several days.

From the review of Death is Hard Work by Stephanie Petit, published in Banipal 65 (Summer 2019).

The Translation Prizes Award Ceremony, is hosted by the Society of Authors, who administer all the prizes. The ceremony will award prizes for translation from Arabic, Dutch, French, German (2 prizes), Hebrew and Spanish, as well as the TA (Translators’ Association) First Translation Prize.

For more about the prizes: https://www.societyofauthors.org/Prizes/Translation-Prizes


• AN EVENING WITH LERI PRICE AND KHALED KHALIFA

Hosted by The Mosaic Rooms and the Banipal Trust for Arab Literature.

This is a free event, but seats need to be booked via The Mosaic Rooms website to avoid disappointment as places are limited.

About the Saif Ghobash Banipal Prize for Arabic Literary Translation

The prize is an annual award of £3,000, made to the translator(s) of a published translation in English of a full-length imaginative and creative Arabic work of literary merit published after, or during, the year 1967 and first published in English translation in the year prior to the award.  The Prize aims to raise the profile of contemporary Arabic literature as well as honouring the important work of individual translators in bringing the work of established and emerging Arab writers to the attention of the wider world. It was the first prize in the world for published Arabic literary translation into English and was established by Banipal, the magazine of modern Arab literature in English translation, and the Banipal Trust for Arab Literature. The inaugural prize was awarded on 9 October 2006.

The prize is administered by the Society of Authors in the United Kingdom, alongside the other prizes (annual, biennial, triennial) for literary translation from languages that include Dutch, French, German, Greek, Hebrew, Italian, Portuguese, Spanish and Swedish. The prizes are awarded annually at a ceremony hosted by the Society.

The Prize is wholly sponsored by Omar Saif Ghobash and his family in memory of his father, the late Saif Ghobash, who was passionate about Arabic literature and other literatures of the world.

The deadline for both entries and publication of works each year is 31 March.

For further history of the prize, more information about entries, judges, rules, and any other details, please go to: https://www.banipaltrust.org.uk/prize/

and to these links:  https://www.banipaltrust.org.uk/prize/award2019