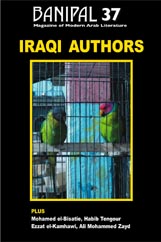 Banipal 37 – IRAQI AUTHORS, our first issue of 2010, celebrates authors from Iraq, with over half its 224 pages devoted to fiction and poetry by 21 writers from different generations, some spread across the world, but many writing from within the country. We celebrate, in particular, a new generation of Iraqi fiction writers and poets who are free to write the story of Iraq we’ve been waiting to hear, however hard.

• Writers who are completely new to Western readers are Nazum al-Obeidi and Nassif Falak (who has his own hair-raising personal story of flight, capture on a number of borders and imprisonment in Abu Ghraib during the Saddam regime), the atmospheric writer Enas al-Badran, Ahmad Saadawi and Shakir Nouri.

•  Hussain al-Mozany tells of a distressing Baghdad he hardly recognises – a jungle of concrete and steel, “fertile ground for the most dangerous kinds of sectarian violence, corruption and filth”.

•  Lutfiya al-Dulaimi, in her new novel The Book of the Girls, rivets the reader’s attention with her modern female characters struggling to find safe haven after suffering violently at the hands of fanatics.

•  Luay Hamza Abbas and Diya al-Jubaily give readers short story flashes of very Iraqi daily life – identifying the corpse of a bullet-ridden old friend, and getting caught in a Friday market bomb blast.

• A pioneer of Iraqi fiction writing is the late Mahdi Issa al-Saqr, who joins the “new” generation of writers in this feature with an excerpt from his first novel in English translation, East Winds, West Winds.

• The poems from the eleven poets are proclamations of free and open expression even though Bassim al-Ansar has a title “I Have Nothing to Say”.