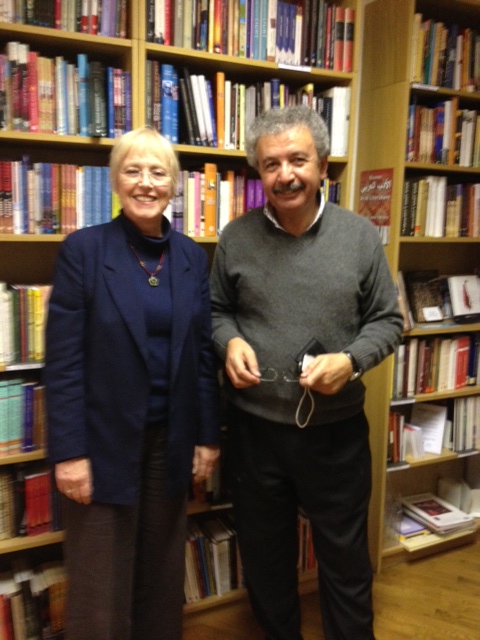 Ibrahim Nasrallah, with Banipal's publisher Margaret Obank, on his visit to Banipal's office and the Library of Modern Arab Literature (in English translation) at the Arab British Centre before the SOAS talk. The Library holds Prairies of Fever and Time of White Horses.

“The old will die and the young will forget.” These words are attributed to the Israeli leader David Ben-Gurion, referring to the Palestinians.

And this sentence is one of the reasons why Ibrahim Nasrallah, the author and poet who was born and raised in a Palestinian refugee camp in Amman, Jordan, decided to start writing about Palestinian history – for fear that “the young” would indeed forget.

Ibrahim Nasrallah has concluded his first tour in the UK to launch the English translation of his historical novel, Time of White Horses (AUC Press, translated by Nancy Roberts). He has given talks and readings in London (Mosaic Rooms and SOAS), and at Manchester and Sheffield universities, and has been meeting a large number of enthusiastic students, academics, and book lovers.

Time of White Horses required 22 years of work, Nasrallah told his audiences. In his research for it, Nasrallah met a large number of “old” Palestinians, and recorded hours and hours of testimonies. Besides the interviews, he relied on numerous historical reference works and studies addressing the details of Palestinian popular life, folklore, and beliefs.

Time of White Horses – short-listed for the 2009 International Prize for Arabic Fiction  – is the latest of his novels to be translated into English, adding to the three works already published: novels Prairies of Fever and Inside the Night, and the poetry collection Rain Inside.

Time of White Horses is a journey into the world of Palestinian horse mythology and the march in defence of Palestine – from the Ottoman period to the notorious Nakba of 1948. It is split into three parts: the Book of Wind, the Book of Earth, and the Book of Humanity. These names, the author explained, derive from the old Arab saying: “God created horse from wind and man from earth.” And then he added: “And homes from humans!”

The first section is set under Turkish rule, and the second addresses the decade of the 1930s, which was set ablaze by the 1936-39 revolt. As for the third section, it revolves around the events of the 1940s culminating in 1948, the year of the Nakba.

Through the lives of three generations of a Palestinian family in a small village, Nasrallah depicts the tragedy of a whole nation under changing historical circumstances and he paints a vivid picture of Palestinian villagers' preoccupations and aspirations.

At the end of his talk at London's SOAS, he was asked if he was depicting Palestine as a homeland or as a symbol in his works. “I cannot distinguish the two”, he replied. In the same way, in describing himself he cannot separate the poet from the man – otherwise he would be only half intact.

And he added: "You will give your country nothing unless you give the world a piece of beauty: a beautiful novel, poem, or musical composition . . . you will stand by your homeland more deeply by being constant to every just cause wherever it exists in this world." Because a person’s nationality, he continued, “is not determined by passports, but by the causes that we adopt and defend. The most impoverished of identities is that which we inherit by birth.”

Ibrahim Nasrallah has been published in Banipal 13 (2002) and Banipal 35 (2009). To read selected poems from the Banipal issues on the website of the Khalil Sakakini Cultural Centre in Ramallah, in a collaboration between Banipal and the Centre, click here.