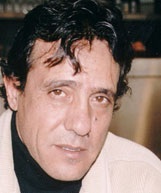 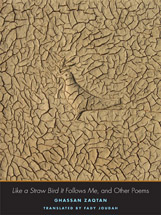 The poetry collection of Palestinian poet Ghassan Zaqtan (above), Like a Straw Bird It Follows Me, and Other Poems, translated by Fady Joudah from the Arabic is shortlisted for the International Griffin Poetry Award. 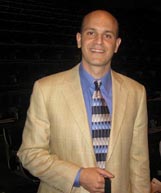 It is reviewed in Banipal 46 – 80 New Poems, published 10 April 2013. Fady Joudah, pictured left, won the 2008 Saif Ghobash Banipal Prize for Arabic Literary Translation for his translation of Mahmoud Darwish's poetry in The Butterfly’s Burden, published in a bilingual edition.

Scott Griffin, founder of The Griffin Trust For Excellence In Poetry and David Young, trustee, announced the International and Canadian shortlist for this year’s prize on 9 April 2013.

Judges Suzanne Buffam (Canada), Mark Doty (USA) and Wang Ping (China) each read 509 books of poetry, from 40 countries, including 15 translations. The seven finalists – four International and three Canadian – will be invited to read in Toronto at Koerner Hall at The Royal Conservatory in the TELUS Centre for Performance and Learning, 273 Bloor Street West, Toronto, on Wednesday, June 12.

For all details of the International and Canadian shortlists, click here