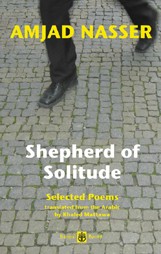 Selected Poems
Translated from the Arabic by Khaled Mattawa

Available via our distributors

On Tuesday 8 November 2011 Amjad was at London's Southbank Centre event entitled State of Emergency, discussing and reading from his poetry.

On Saturday 11 July 2009, Shepherd of Solitude was launched at the Ledbury Poetry Festival, with Amjad Nasser in conversation with Sinan Antoon and Margaret Obank, with readings of poems in Arabic and English.

About Shepherd of Solitude

• "With his unusually wide and expressive range Amjad Nasser unites the varied facets of his experience in a discourse at once perceptive, critical, tender, and ironically comic."
Alfred Corn

• At times a powerfully existential chronicle of exile, Shepherd of Solitude conjures a new understanding of Arab life, from war-torn Beirut, to castles in Andalusia, to Bedouin Jordan, to a London suburb

Shepherd of Solitude is Amjad Nasser's first English collection, translated and introduced by the foremost translator of contemporary Arabic poetry into English Khaled Mattawa, with the poems selected by poet and translator from the poet's Arabic volumes over the years 1979 to 2004.

Amjad Nasser was born in Jordan in 1955. He is a major contributor to today's Arab poetry scene and has published eight volumes of poetry, two travel memoirs, Flight of Wings (1998) and Under More than One Sky (2002), and a novel. He works as managing editor and cultural editor of Al-Quds Al-Arabi daily newspaper. A selection of his poetry was published in French translation, Ascension de l'amant, with a Foreword by Adonis, (1998), also one in Italian (2001) and one in Spanish (2002).

Khaled Mattawa is the author of four books of his own poetry and has translated eight volumes of contemporary Arabic poetry and co-edited two anthologies of Arab American literature.