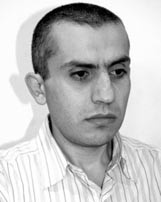 Rabee Jaber is a Lebanese novelist and journalist born in 1972 in Beirut and studied physics at the American University of Beirut. He is presently editor of Afaaq [Horizons], the weekly cultural supplement of Al-Hayat daily newspaper. He was selected as one of the 39 best young Arab authors under 40 by the Beirut39 Hay Festival project.

His first novel, Master of Darkness, won the Critics Choice Prize in 1992 and since 1995 he has written 17 novels, all much admired by both readers and critics. Youssef al-Inglizi [Youssef the Englishman], published in 2002, was excerpted in Banipal 17, translated for Banipal by Issa J Boullata, as part of a feature on the author's work. For details of the feature please go to Banipal 17.

A review by Sophie Richter-Devroe of Die Reise des Granadiners [The Journey of the Granadan] (2005) by Rabee Jaber, translated into German by Nermin Sherkawi, was publshed in Banipal 25. The French translation of his novel Berytus (Gallimard, 2009) was reviewed in Banipal 35 by Olivia Snaije.  Excerpts from The Druze of Belgrade were published in Banipal 41 and 43.