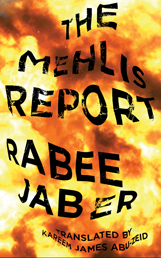 Beirut awaits the preliminary findings of the Mehlis Report – the UN investigation into the assassination of Lebanon’s Prime Minister, Rafik Hariri. On February 14th, 2005, two thousand pounds of explosives shook the city and the confidence of its people. The Mehlis Report – released almost eight months later – would put all rumours and fears to rest.

Narrator, Samaan Yarid, is a Beiruti architect who cannot imagine living anywhere else. In his account of homes, streets, people, eateries and girlfriends nothing is rushed – Samaan is a man comfortable with the space around him. Like Orhan Pamuk’s Istanbul, Beirut joins the list of Mediterranean cities described in loving detail, from Venetian skylights to the lofty ceilings of old houses oak trees and grandfather clocks. All bear witness to the vision of enterprising Levantines. Samaan is a tireless walker who knows Beirut’s streets and its short cuts – a day in his life captures the unrushed way of life in which people enjoy their food and their friends. Jaber shares with Pamuk a longing for an older way of life that, for him, represents culture at its best.

The fear of civil war, however, is never far away and, as the city anxiously awaits the Mehlis report, this fear appears real. Beirut is tense (skittish is a word often used) and haunted by memories of conflict. We learn that Samaan’s younger sister was kidnapped and left dead on the dividing line between East and West Beirut. Despite tragedy, people move on. Could the report on the latest high profile victim reignite conflict? Will Mehlis have the courage to indict the perpetrators behind the assassination? Will the truth set anyone free?

Described as a thriller, the resemblance of the title to that of the neo-noir science movie “Minority Report” might be a coincidence. Suspense grips the narrative from the first pages and soon another voice begins to track Samaan’stireless roaming which is also a symptom of his anxiety.

Just over half way through the novel, we learn that this second voice belongs to his dead sister, Josephine, narrating her capture and “crossing over”. Souls in the next life, according to Jaber, spend their time in a library, poring over books in large reading rooms. Josephine writes compulsively to exorcise her painful end. Like her brother, her longing keeps her attached to the city. We are told that there are two types of books: real ones and ones produced by those who do not read (which are not worth reading!). The only torment described in Jaber’s afterlife takes place in the enclave reserved for killers who live in huts made of bones and swim in pools of blood as their thirst sucks the tears from their eyes.

The accounts of Samaan and Josephine are punctuated by the events of the civil war. In Jaber’s work, fear is experienced as an afterthought once we are out of the danger zone of war. The obsessive construction boom (Rafik Hariri was, after all, a business tycoon) came at the cost of demolishing Beirut’s identity.

Without revealing how the novel ends, each telling of the Lebanese civil war remains a deeply personal account – The Mehlis Report joins other works, such as Hoda Barakat’s The Tiller of Water, in depicting a city haunted by death and destruction. Kareem James Abu-Zeid has faithfully maintained the pace of this complex work of fiction. In Jaber’s first novel to be translated into English, the depth of his prose has been well served through Abu-Zeid’s meticulous efforts.

Published in Banipal 47 – Fiction from Kuwait