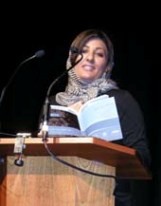 We only recognised that sea laden
with our mothers’ fear after it raised
its head high and ate the feet of our homelands . . .
It crashed near our homes,
cast onto us
its waves heavy with black tar
and took our fish . . .
They said the war was coming.
It did not come with its soldiers
but sent us its ammunition.
We knew the battle could have killed us
without coming to our land.
The grandmothers prayed that the oil would vanish
and the world prayed to God that He wouldn’t answer their prayers.

THE MORNING STARTS WITH THE COLOUR OF DUST

In this city
the days wander in the alleys
like weary puppies,
dust fills our mouths,
and the sun is no longer seen
as it should be . . .
We are alive . . .

I think we walk through the days
and write to make certain
we are there, opposite the sun
that is no longer seen . . .
The morning touches us with its light
like a traveller looking at the world through
the window of his lodge.
It is high up there
and we are here.
It can hardly notice us.


Selected from the author’s collection
(A Night Heavy on the Night), published in Arabic by Abu Dhabi Authority for Culture & Heritage Cultural Foundation, 2010