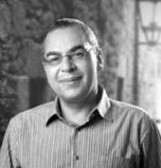 Ahmed Khaled Towfik started writing a series of horror and science fiction novels in 1993. Born in Tanta, Egypt, in 1962, he graduated from Tanta Medical School in 1985 and turned to writing after joining the Modern Arab Association publishing company in 1992. His latest novel Utopia was published in 2008 to widespread acclaim.