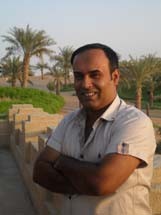 Ahmed Saadawi was born in Baghdad in 1973 and is a novelist, poet, painter and journalist. He has published some collections of poetry, four novels, and one collection of short stories, with some short stories published in magazines and anthologies.

He has worked as a journalist and was a BBC correspondent in Baghdad (2005–2007). He writes documentaries and screenplays for TV. He was one of the Hay Festival's Beirut39 authors.