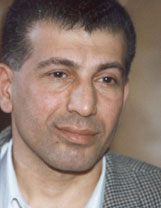 was born in Iraq in 1952. He studied Arabic Literature at Baghdad University. He left Iraq in 1976 to live in Poland, where, on a government scholarship, he earned a Masters Degree in Polish Literature and a PhD in Drama. He now teaches at Warsaw University. He has published seven collections of poems, five of them translated into Polish. A selection of his poetry was translated into English as Questions and their Retinue by Khaled Mattawa and published by the University of Arkansas Press. His last collection, Faradees wa Aya’el, was published by Al Mada, Damascus, 1998.