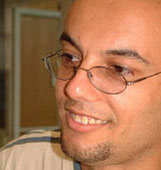 He is the author of five novels: Shadows in the Memory (1997), The Tale of the Harvest Night (1999), Snowball (2000), The Sour Grapes of Paradise (2003) and A Suspended Life (2014). A Suspended Life has been shortlisted for the 2015 International Prize for Arabic Fiction, and is excerpted in Banipal 52– New Fiction with the agreement of IPAF.

Atef Abu Saif has also published two collections of short stories, three plays and a number of books of political science, including: Civil Society and the State: A Foundational Reading with Particular Reference to Palestine (2005). He writes a weekly article for the Palestinian Ayyam newspaper.