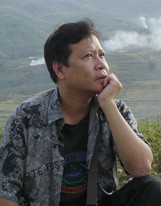 Ho Anh Thai is one of the most prolific writers in Vietnam. An army veteran, a diplomat and now an editor for World Affairs Weekly, he has produced fifteen novels and story collections, hundreds of short stories, edited an anthology of translated Vietnamese stories published in India, and an anthology of translated contemporary American fiction published in Vietnam. His first story, written when he was 17 years old, drew national attention. The editors who accepted it presumed he was much older and were astonished when a teenager showed up at their offices.

A voracious reader since childhood, Thai reached the conclusion early that he could write as well or better than the novels he picked up. He would not imitate but create his own path. This mindset has made him one of the most popular writers for the post-war generation in Vietnam – the generation too young to fight, but that grew up with the sound and fury of the war, the sacrifices of their parents’ generation as an ideal almost impossible to follow, and with the promise of a peaceful post-war society seemingly out of reach.

Born in Hanoi in 1960, Thai was evacuated to a "safe" area in the countryside when the American bombing campaign began. One of his earliest memories was swimming with a group of children and suddenly seeing the American planes bombing the village, then running back with a young girl, to find the house where her parents were staying destroyed and still burning. The image was seared into his eyes, and perhaps stands for the way the tremendous losses of the war generation continue to haunt subsequent generations in Vietnam. It is always difficult for the children of heroes and martyrs to find their own identities, particularly so when they grow up in a country whose severe deprivations call into question the values and methods of their elders. That struggle illuminates much of Thai’s work.

To define themselves and their direction, he suggests, the post-war generations must be able to concede their debt to the past, but also to see clearly what must be criticized and changed. That perception is stressed thematically in Thai’s work and applied through his play and experimentation with form and language. Thai acknowledges his roots in the history and literature of his country, but has also been open to other influences and has allowed his own writing to extend contemporary Vietnamese literature into new directions.

The title novella of his collection Behind the Red Mist (1998), can serve as an example of Thai’s daring as a writer, as well as the themes that interest him and that he explores in much of his work. A fantasy, the novel takes a modern Hanoi youth, and by means of an electric shock sends him back in time, to wartime Hanoi, where he witnesses and participates in the courtship of his own parents. In discovering the humanity of his parents he finds also the humanity of that venerated, mythological wartime generation. In doing so, he makes himself part of the on-going flow of Vietnamese history. Ho Anh Thai is a writer with few illusions about human beings, and maybe even little hope. But in spite of, or perhaps because of that, he treats his characters with a compassion which reveals his respect for the complexity of their humanity.