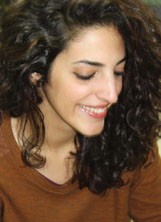 Dalia Taha is a poet and a writer. In 2012 she wrote the play, Kefiyyeh, Made in China which was produced by the A. M. Qattan Foundation and the Royal Flemish Theatre and was later published in book form. She is currently working on a new play and she was awarded the 2013 "International Playwright Residency" from the Royal Court Theatre in London.