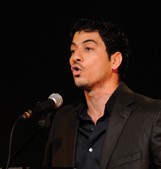 Marwan Makhoul was born to a Palestinian father and a Lebanese mother in 1979 in the village of Boquai'a in the Upper Galilee region of Palestine. He currently lives in the village of Maalot Tarshiha. Marwan holds a Bachelor’s degree in Civil Engineering from Al-Mustaqbal College and now works as a civil engineer and is the director of a construction company.