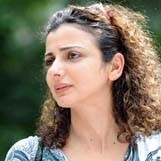 Ibtisam Azem is a Palestinian writer and journalist. She was born in Tayibe, in the area known as the Triangle, North of Jaffa. She studied at the Hebrew University of Jerusalem and later at the University of Freiburg (Germany), where she completed an MA in Islamic Studies and German and English Literature.

She works as a senior correspondent covering the United Nations for the Arabic daily al-Araby al-Jadeed, after working as producer and correspondent for Deutsche Welle TV-Arabic in Berlin and New York. She has published essays and short stories in Al-Akhbar, Qantara.de, and al-Jazeera.net. She is also a co-editor at Jadaliyya e-zine.

Her first novel, Sariq al-Nawm (The Sleep Thief) was published in Beirut by Dar al-Jamal in 2011. Her second novel, Sifr al-Ikhtifaa (The Book of Disappearance) was published in 2014, also by Dar al-Jamal, and is excerpted in Banipal 54 – ECHOES (2015), translated by Sinan Antoon. The Book of Disappearance is published in English translation by Syracuse University Press, 2019, translated by Sinan Antoon, and in Italian by Hopefulmonster, 2021 translated by Barbara Teres, and also forthcoming in Hebrew and German. She is currently working on a collection of short stories.