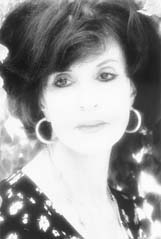 was born in Lebanon, in Besherri, the village of Gibran Kahlil Gibran. She studied Literature, and began publishing her poetry in 1966. She has published numerous novels and some twenty collections of poetry. In 1999, she published a bestselling autobiographical novel, La maison au bord des Larmes (Editions Balland), published in English translation by Graywolf Press, USA, 2005 (trans. Marilyn Hacker), excerpted in Banipal No 24, p56. Throughout her career, she has been awarded the Apollinaire Prize for Poetry (1980), the Mallarmé Prize (1987), the Grand Prix of the French Society of Authors (1990) and the Prix Supervielle (1998). In December 2011, she was awarded the Prix Goncourt de la Poésie, in recognition of her life's work. She currently lives and writes in Paris.