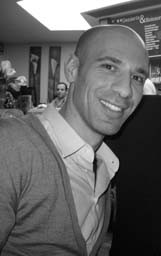 (b. Ighazzazen, Morocco, 1975) moved to the Netherlands when he was four. After living in Rotterdam and Leiden, he moved to Amsterdam where he lives now. His spectacular debut in 1996 was the novel Bruiloft aan zee [translated into English as Wedding By The Sea, Weidenfeld & Nicolson]. This book became an international bestseller and was awarded numerous national and international awards (a.o. Le Prix du Meilleur Premier Roman Etranger in France). His body of work has expanded to include stories, essays, journalism, drama, poetry as well as four more novels, of which De langverwachte [The Long Expected], 2002, won the Libris Prize for best novel of the year. In the summer of 2006 he was an accidental witness of the war in Beirut, about which he wrote Berichten uit een belegerde stad [Messages From a Besieged Town]. Most recently he has published De stem van mijn moeder [My Mother's Voice], a novel in which he returns to the theme of his first book.