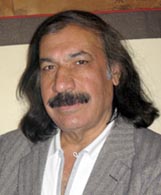 was born in Badiya al-Sham [Syrian desert] in 1945. He is a writer and a surgeon. studying medicine and philosophy at Damascus University and specialising in surgery in Paris.

He has published seven novels; the first, Al-Rajul Alathi Ya’kul Nefsahu [The Man who Eats Himself] in 1973, the fifth, Tafrigh al-Ka’in [Emptying of the Being], in 1996, and the latest Madih al-Harab [n Praise of Deserting] by Muassassa Al-Arabiya, Amman/Beirut, 2005, excerpted in Banipal 33. He is also well-known as a travel writer. He lives and works in Paris.