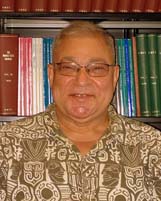 Farouk Abdel Wahab was the pen-name of Farouk A W Mustafa, translator and Ibn Rushd Professorial Lecturer in Modern Arabic Language in the Department of Near Eastern Languages and Civilizations, and Associate Director of the Center for Middle Eastern Studies, both at the University of Chicago, who died, aged 70 years, on 3 April 2013, after a short illness.

He taught at the University for almost 40 years, and established The Arab Circle, a weekly lecture in Arabic at the University's Centre for Middle East Studies.  For more about the Circle, and to hear memories of Farouk Mustafa by colleagues and former students, and to hear his own lectures go to: https://lucian.uchicago.edu/blogs/arabiccircle/?s=farouk

Farouk Mustafa was born in Tanta, Egypt, and grew up there and in Cairo. He has a BA and an MA (English Literature) from the University of Cairo, and a PhD in Comparative Literature from the University of Minnesota (1977). He specialised in Arabic literature – particularly Arabic theatre, in comparative literature, and in popular culture and modern intellectual history.

He translated the following novels of Egyptian authors: