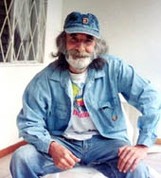 Anwar al-Ghassani was born in 1937 in Qal’at Saleh, a small town in the south of Iraq, to a Turkmen father, who was a state employee, and an Arab mother. He grew up in Kirkuk and worked as a teacher before moving to Baghdad to work as a translator and journalist. After the first military coup d’état of the Ba'ath Party in 1963, he was arrested and spent many months in prison. In 1965 Anwar was a cultural editor at Al-Jumhuriya daily newspaper in Baghdad, and played a distinguished role in publishing many literary works by young poets and writers of the Iraqi sixties' generation. He was one of the friends of the highly influential Kirkuk literary group, which for decades played a very important role in renewing Iraqi and Arab literature.

In 1968 he left the country to study in Germany, where he received a doctorate in journalism from the University of Leipzig. He arrived with his wife Ana Rodriguez in Costa Rica in 1979, later returning to Germany and then working in Algeria before returning to Costa Rica in 1984. There he became professor of journalism, computer-mediated communication and internet at the School of Mass Communication, University of Costa Rica, also writing occasionally for Arabic papers and magazines. He spoke many languages – Arabic, German, English and Spanish, also Turkmenish and Kurdish, and has left his presence on YouTube (http://www.youtube.com/watch?v=ptjPRCqb9Vs&feature=player_embedded), MySpace and blogspots as well as his own website.

He sadly died following lung surgery in San Jose in 2009.

His comprehensive website of his work, research and literary proejcts, with many of his own works and photographs can be found at http://al-ghassani.net/