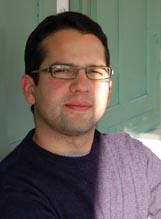 Camilo Gómez-Rivas is a historian of the medieval Mediterranean. He wrote a doctoral thesis on Islamic law and society in the Maghreb at Yale University. At the American University in Cairo, where he taught in the department of Arab and Islamic Civilisations for five years, his research focused on the social history of Islamic Spain and the Maghreb in the medieval and early modern periods. He translates poetry from Arabic to English and is a contributing editor of Banipal. He is presently Assistant Professor of Mediterranean Studies in the Literature Department of the University of California, Santa Cruz.  For more information on his work and publications, click here.