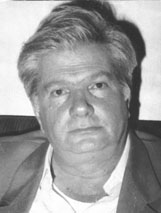 18 December 1923 – 18 December 1989
Ghalib Halasa was born near Madaba in Jordan. He lived in Beirut as a teenager and went on to live in Baghdad, Cairo and Damascus, writing seven novels and a collection of short stories considered among the best of modern Arab literature. He contributed regularly to newspapers.

See Banipal No 26 for the Literary Influences feature, drawn from his many newspaper columns collected together and published posthumously.

See Banipal No 6, Autumn 1999 for a special feature on his work with translations and articles.