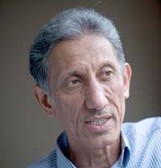 Taleb Alrefai was born in Kuwait on 10th May, 1958. In 1982, he obtained his degree in Civil Engineering from the College of Engineering and Petroleum at the University of Kuwait and began writing during his studies in the mid-seventies. He published his first collection of short stories in 1992, under the title of Tal ‘Amrak Abu ‘Ujjaj (Live Long Abu ‘Ujjaj) and has published six more collections and four novels since then.

His first novel, Zillu al-Shamsi, (The Sun’s Shade), was republished in a revised edition in 2012. He has also written one play, Urs al-Nari (Wedding of Fire). In 2002, he won the State Prize for Letters for his novel, Ra’ihat al-Bahri (The Scent of the Sea) and his works have been translated into English, French and German.

He was also Chair of Judges for the 2009/2010 International Prize for Arabic Fiction and is founder of Al-Multaqa (Cultural Circle), a discussion group which meets in his house every two weeks to discuss literature, thought and art.