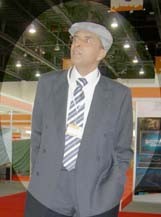 Ibrahim al-Koni was born in 1948 in the desert of the Tuareg, Libya. He grew up there, not learning to read or write Arabic until he was 12 years old. He studied comparative literature at the Gorky Institute in Moscow, and was a journalist in Moscow and Warsaw. He has lived in Switzerland since 1993, and authored over 50 novels, short stories, poems and aphorisms, all inspired by the desert. Some works been translated into 35 languages, including eight into German and six into French. He has a growing number of works in English translation, including Bleeding of the Stone, translated by May Jayyusi and Christopher Tingley, Interlink/Arris 2004 (Reviewed in Banipal No 19, Spring 2004, p148), and Anubis, trans. William M Hutchins, AUC Press, 2005 (Reviewed in Banipal No 23, Summer 2005, p146). William M Hutchins has translated two more novels of al-Koni, The Seven Veils of Seth (2008) and The Puppet (2010). Elliott Colla has translated Gold Dust (2008), which was a runner-up for the 2009 Saif Ghobash-Banipal Translation Prize, and of the forthcoming Magus.