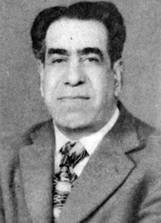 Shalom Darwish was born in the village of ‘Ali al-Ghabri (‘Amara district) and moved to Baghdad as a child, where he studied at the Rachel Shahmon school. He obtained a law degree in 1938, and worked as a lawyer for many years.

In addition, he served in Iraqi public life, assuming leadership roles in the Jewish community, and also in Iraqi politics as a member of the social-democratic National Democratic Party (the NDP, al-Hizb al-Watani al-Dimuqrati). In 1947, he was elected as an NDP member of parliament.

He published his first short stories and critical essays in the weekly literary journal al-Hasid, founded by Anwar Sha’ul in 1929.

He was one of the most gifted writers of short fiction in Iraq in the 1940s and 1950s. His prose captured many of the dilemmas characteristic of Iraqi and Iraqi-Jewish society, such as migration from the countryside to the big city, the status of women in Iraqi society, and family relations shaped under changing societal norms.

His first volume of Arabic short stories dealt with the life of Iraq's masses and was followed by a second collection, Baʿd al-Nās (One of the People, 1948). He wrote a great deal about women, and their struggles for emancipatory rights, as more Iraqi, and Iraqi-Jewish women, attained higher education, called for suffrage, and strove to choose the husbands they were to marry and shape a more equal vision of family life. Arab critics at the time and later scholars of Iraqi and Arabic literature, such as Reuven Snir and Shmuel Moreh, hailed his pioneering work.

He was forced to leave Iraq in 1950, traumatized by the persecution that his community, and he himself, endured in the years 1949-1951. In Israel, he continued writing in Arabic, in the government-sponsored Arabic-language press, and working as a lawyer.