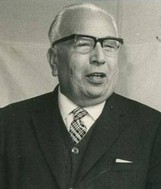 Anwar Sha’ul was born in Baghdad into an educated middle class Iraqi Jewish family with European roots – his grandfather an immigrant Jew from Austria who arrived in Baghdad in the mid-nineteenth century – and Anwar Sha’ul was a typical renaissance personality in the formative stage of the new Iraqi state.

He was a writer of poetry and fiction, a journalist who published and edited periodicals, a translator and a man of theatre and cinema, a lexicographer and an educator, and in fact an encyclopaedist and “a master of a thousand crafts” or jack-of-all-trades. In that he followed in the footsteps of the great Christian encyclopaedists of the cultural revival (Nahdha) of Arab culture, such as Ahmad Faris al-Shidyaq (1804-1887), Jurji Zaydan (1861-1914), and Butrus al-Bustani (1819-1883).

Above all, Sha’ul was a dominant figure among the Iraqi-Jewish secular intellectuals and created a movement inspiring many other young authors who were eager to implement the vision he started to push forward. Before he was twenty years old, he led a group of young Jews who started a library that included books on science and literature, in order to attract youth who would otherwise go visit “coffee houses, fun houses, and other places of recreation and money spending.” (The Jewish World; French title: l’Univers Israélite) that came out in Beirut, enthusiastic speeches were given that encouraged youth to look at its books and to take on research projects. On this occasion, Sha’ul recited his poem “Nahdat al-Kiram” (The Renaissance of Noblemen), in which he called for the return of the glory of the past.

Sha’ul’s major early contributions were in the field of the short story, and they came while he served as the editor of two journals, al-Misbah (1924-1929) and al-Hasid (1929-1938), the first issue of which was published on 14 February 1929. Sha’ul’s desire to modernize Iraqi fiction came together with strong inspiration from traditional Arabic, canonical and folkloristic sources. No wonder that he sometimes wrote under the pen name of Ibn al-al-Samaw’al, an allusion to the pre-Islamic Arab-Jewish poet, al-Samaw’al ibn ‘Adiya’.

Sha’ul’s first story, “al-‘Ashiq al-Ghadir” (The Unfaithful Lover), was published in 1924. His second story, “Fi Hisar al-Kut” (In the Siege of Kut), which deals with the suffering of the people in the province of Kut during the First World War, was one of the first steps toward realism in the art of the emerging Iraqi short story.

Among his activities, Anwar Sha’ul was the most prominent Jewish intellectual at the time in Iraq struggling for women’s rights. Inspired by such Iraqi defenders of women’s rights as Jamil Sidqi al-Zahawi (1863-1936), whose commitment to that cause won him the title “The Woman’s Liberator.” His compatriot Ma‘ruf al-Rusafi (1875-1945) in his poem “al-Mar’a fi al-Sharq” (The Woman in the East) saw an essential link between the status of women in society and the strength of Arab-Iraqi nation.

In 1930, he published al-Hasad al-Awwal (The First Harvest), one of the first Iraqi collections of short stories. In the introduction to the collection, which includes thirty-one stories, he presents his conception that saw literature as a critical medium that must be used as a vehicle for social reformation.

• Extracted from the essay by Reuven Snir in Banipal 72 – Iraqi Jewish Writers, entitled “Religion is for God, the Fatherland is for Everyone”: Anwar Sha’ul and the Rise and Demise of Arabic Literature.