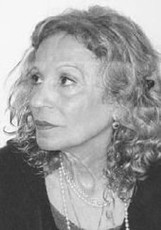 Amira Hess, born in Baghdad in 1943, is a descendant of the Beth-Adoni kabbalist and poet lineage which included, amongst others, poet and Torah scholar Hakham Harun Barzani, and Asenath Barzani, a renowned 17th century female poet and rabbi. Hess moved to Israel from Iraq in 1951 and initially settled at the Yokneam migrant transit camp. Her immigration experience would later become a fundamental, defining influence on her poetry – shaping, underscoring, and informing it.

In 1984, Hess marked the publication of her debut poetry volume, And a Madness-oozing Moon, a dazzlingly beautiful, profound collection of poems that left Hebrew poetry afficionados positively entranced. Hess has since authored nine further poetry volumes, with the next one, How We Get Remade, slated for publication in late 2021.

Hess’s genealogy links her to a range of rabbinical and kabbalist traditions that undoubtedly account for the centrality of dreams and madness in her body of work, as well as the ever-increasing presence of Arab Jewishness in her poetry. Throughout her career, Hess has been the recipient of many awards, including the 2015 Amichai Poetry Prize.

• A fuller essay on Amira Hess and her work by Tami Israeli, along with poems translated from the Hebrew by Eran Edry, is published in Banipal 72 – Iraqi Jewish Writers (Autumn/Winter 2021)