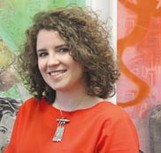 Nadia El-Sebai is the Executive Director of the Arab British Centre. She is an experienced arts professional with extensive knowledge of the Middle East. She has developed a keen interest and understanding of the ways in which creativity can facilitate inter-cultural dialogue between the UK and the Arab world.

After training as a contemporary jeweller she embarked on a career in cultural relations at the British Council in 2006. She has used her skills and experience to work with arts and cultural relations organisations from bases in the United Kingdom, Syria, Kuwait, and Qatar.

Nadia El-Sebai has an MA in Cultural Heritage and International Development from the University of East Anglia, where she focussed her research on the development of cultural districts in the Arabian Peninsula. She joined the Arab British Centre in May 2015.

• The Arab British Centre, established in 1977 and now based in London's Gough Square, aims to develop further understanding of the Arab world by promoting its culture, sharing its knowledge and supporting a community of individuals and organisations that work to enhance friendship and collaboration between people of the UK and the Arab world.