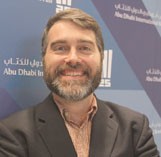 Chip Rossetti has translated several works of Arabic fiction, including the story collections Animals in Our Days by Mohamed Makhzangi and No Windmills in Basra, by Diaa Jubaili, as well as the novels Beirut, Beirut by Sonallah Ibrahim and Utopia by Ahmed Khaled Tawfik, and the graphic novel Metro by Magdy Elshafee.

His latest translation is the collection of short stories No Windmills in Basra (Deep Vellum Press, 2022), by Iraqi writer Dhia Jubaili, which won the Almutaqa Prize for the Arabic Short Story.

He works as the Editorial Director for the Library of Arabic Literature bilingual book series at NYU Press and has a PhD on the Iraqi writer Muhammad Khudayyir from the University of Pennsylvania.

His short translations have appeared in the White Review, Asymptote, Banipal and Words Without Borders.